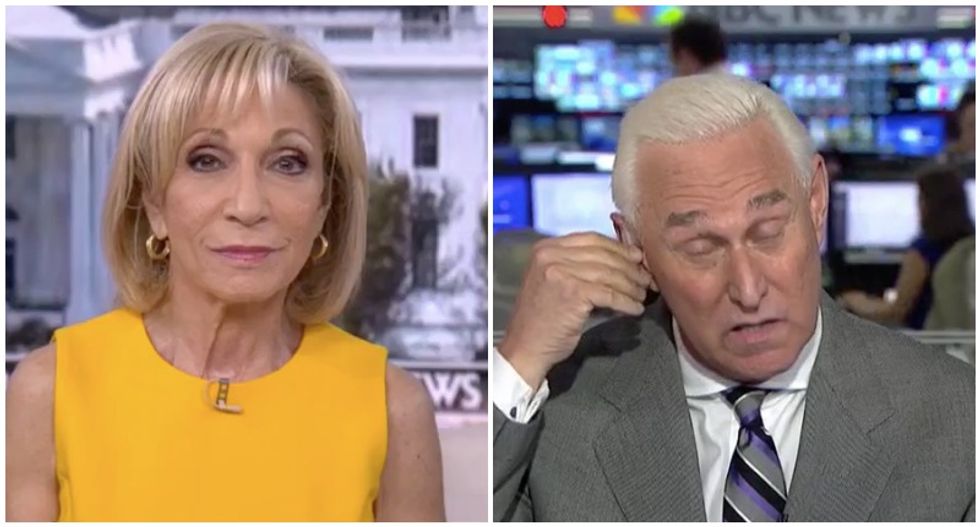 "I have not heard that from credible sources around the president," Stone insisted. "I think it is fair to say that Mayor Giuliani is a very tough guy, and right now the president needs a tough leader on his legal team."

Stone issued attacks on Mueller and deputy attorney general Rod Rosenstein, but he stuttered, furiously blinked and fiddled with his earpiece after Mitchell asked him to explain why he previewed stolen emails that U.S. intelligence believe were stolen by Russian hackers.

"Coincidence," he said. "Let's go back to the previous tweet, which was crucial. I said 'the' Podestas, apostrophe 'S' -- should have been 'S,' they tell me -- the time in the barrel will come."

"That would be based on conjecture, supposition -- there's no evidence that would suggest that is what I was speaking to," Stone said, as he adjusted his earpiece. "I never said anything of the kind."

Mitchell asked him to explain his Aug. 4, 2016, tweet claiming to have shared dinner with WikiLeaks founder Julian Assange, and Stone claimed the email was a joke to his "neurotic" colleague Sam Nunberg.

"It's schtick, please," Stone said. "My passport, customs records, airline records, the security cameras at the Ecuadorian embassy, my hotel bill, my airline bills to Los Angeles and a receipt from Izzy's Diner on Santa Monica Boulevard would show you that I was not in London that weekend and could not have met with Assange. And to anticipate a follow-up question, no, neither by Skype or phone, either."

Stone then blamed a faulty earpiece for his brief delay before denying that he had met with Mueller and his investigators, and he cast doubt on the U.S. intelligence consensus about Russian hacking of Democratic targets during the 2016 election.

"I don't buy into the premise that Guccifer is indeed a Russian asset," he said. "I think that is unproved."

Stone claimed only MSNBC and other media outlets had concluded the hacker was a Russian operative, and he was thrown off balance when Mitchell pointed out that Mike Pompeo, Trump's former CIA director and current Secretary of State, agreed.

"The evidence, Mr. Pompeo," Stone began. "Our intelligence agencies have been politicized. This is, in my opinion, an open question. There's vigorous debate on it on the internet. Guccifer 2.0, whoever that is, is using software that is registered to a person who works at the Democratic National Committee."

"A number of counterterrorism IT experts in a great piece published by The Nation questioned whether the DNC was ever hacked," he continued, "whether the purloined information was taken out the back door through some kind of portable computer drive, so it is unproven at best. But in all honesty, it's irrelevant because my only 24-word communication with him happened six weeks after WikiLeaks has already published the story, the allegedly hacked emails, consequently, could not have colluded with him to do so -- it's chronologically impossible."

Stone then insisted the accusations against him were too stupid to be plausible.

"I made that exchange on Twitter entirely public," he said. "Who would conduct international espionage on Twitter?"

On Saturday, TMZ reported that neo-Nazi activist and livestreamer Nick Fuentes was driven out of an In-N-Out Burger in Los Angeles — after throwing a drink at fellow patrons in a food fight.

"The video, obtained by TMZ, show[s] Nick holding a large cup ... without warning he pitches it across the Hollywood restaurant early Saturday morning," said the report. "Liquid from the cup showers everyone in its path ... and the doused diners look at Nick in utter shock."

Cyborgs v ‘holdout humans’: what the world might be like if our species survives for a million years

Most species are transitory. They go extinct, branch into new species or change over time due to random mutations and environmental shifts. A typical mammalian species can be expected to exist for a million years. Modern humans, Homo sapiens, have been around for roughly 300,000 years. So what will happen if we make it to a million years?

Science fiction author H.G. Wells was the first to realize that humans could evolve into something very alien. In his 1883 essay, Man in the year million, he envisioned what’s now become a cliche: big-brained, tiny-bodied creatures. Later, he speculated that humans could also split into two or more new species.