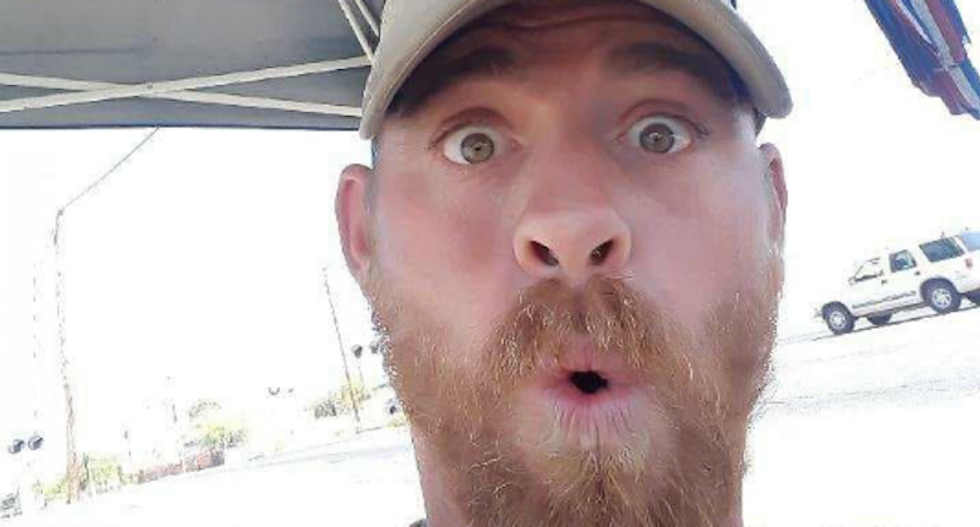 An attention-seeking Arizona man essentially held himself hostage to publicize his unfounded claims about an abandoned homeless camp.

Veterans on Patrol founder Michael Lewis Arthur Meyer, who goes by his middle names, climbed a watch tower near the abandoned camp and threatened to remain there until investigators agreed to use cadaver dogs to find the bodies he believed were buried there.

Tucson police examined the site and found no evidence to support Arthur's claims that children had been abused, tortured and killed at the camp, and the group's leader came down from the tower.

However, the former drug addict who never served in the military, continued posting videos on Facebook to rally militia groups and other would-be supporters to his cause.

Police investigated the camp after it was reported last week, but officers found no evidence of illegal activity, including human trafficking.

Officers used cadaver dogs to search the property for human remains but found none.

Veterans on Patrol, which searches for homeless vets in washes and desert areas, found the camp and concluded it was used to exploit and harm children, and local media reported those unverified claims before police investigated.

Those TV reports and social media videos were shared hundreds of thousands of times on Facebook.

Police and city workers are working with the property owner to clear out the abandoned camp and secure the area.

Meyer was arrested twice in 2015 for climbing poles to draw attention to veteran suicides, and he was arrested in August at a Tucson hospital over alleged threats against a passerby.

Arthur was involved in a fight at the January 2016 standoff at Malheur Wildlife Reserve between his group and militants supporting Ammon and Ryan Bundy.

He went with three other men to remove veteran Ryan Payne, who he said was "radicalized" and "suicidal," from the standoff before he could commit acts of violence, but fellow participants in a 2014 standoff involving the Bundy family at their Nevada ranch appeared to turn on him afterward.