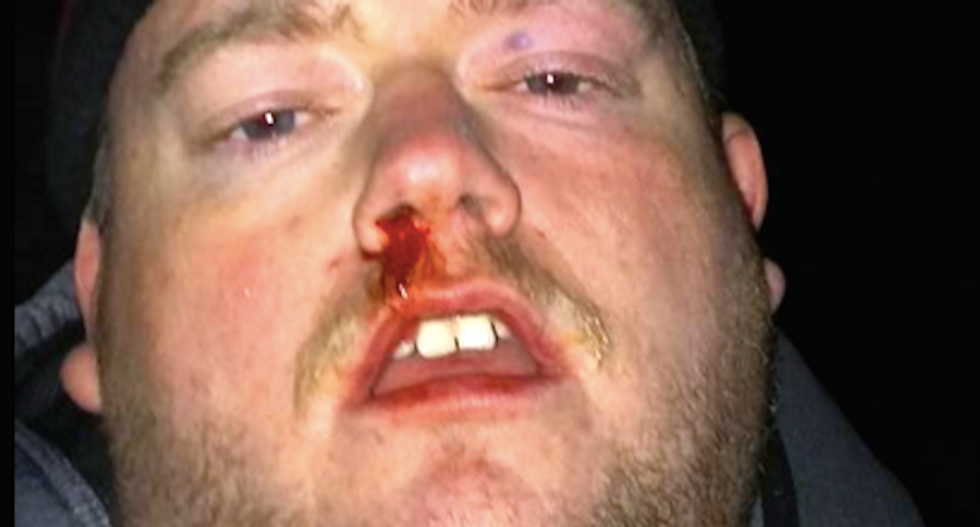 Rumors and harsh facts arriving from outside the grounds of an Oregon nature preserve appear to be roiling the armed militants who have taken over a federal building in hopes of sparking an armed confrontation with government agents.

At least one of the militants, Joe "Capt. O" Oshaugnessy, left the Malheur National Wildlife Refuge amid drinking claims after arguing with participants over bringing their wives and children to the standoff, and another -- Brian "Booda" Cavalier -- left the compound after news reports revealed he had lied about serving in the military.

A former compatriot-turned-opponent claims one of the most prominent militants, Blaine Cooper, sucker-punched one of his friends -- sending the counter-protester to the hospital with a concussion and serious facial injuries.

Lewis Arthur, who describes himself as an anti-violence patriot and head of the Veterans on Patrol activist group, said he arrived Wednesday with three other men to remove a "radicalized" and "suicidal" veteran who suffers from post-traumatic stress disorder and has a tendency toward violence when he's placed under stress.

"We came up here to de-escalate the situation and to convince someone that having the federal government killing you is not going to make you a martyr, and the majority of the 'patriots' are pounding on their keyboards -- they're not going to rise up," Arthur said in a video posted Thursday evening on Facebook.

#Truth VOP'S CRT met with Sheriff Ward before leaving Oregon. Both Founders were assured that the Sheriff's Department wants a peaceful resolution. Blaine Cooper made a statement... Both Founders are offering Blaine to take a polygraph with them and make all results public. Lying about VOP attacking a disabled Veteran us something we will not let go unanswered.Thank you to all the Residents in Harney County for supporting our efforts to find a peaceful resolution. We regret that our Mission failed... but we are on our way back to AZ to keep #DoingItRight.

Posted by Veterans On Patrol on Thursday, January 7, 2016

Arthur said the 36-year-old Cooper, a former friend, attacked a member of his three-man crew during an argument over their mission to remove women, children and Ryan Payne -- a U.S. Army veteran who has bragged about setting up sniper teams to target federal agents during the 2014 standoff at Bundy ranch.

"(Payne) made it very clear out there that he wanted the federal government to go and take him out," Arthur said. "I had to come up here because I know what he wants."

However, Cooper and other militants say Arthur, who set up a camp across the road from the nature preserve, initiated the fight by assaulting a guard and trying to enter the compound.

Jon Ritzheimer, the Arizona militiaman known for organizing anti-Muslim rallies, disputed that Payne hoped to become a martyr to the "patriot" cause and said Arthur was merely seeking "a couple of seconds of fame."

John Hildinger, who was arrested on a Maryland firearms charge on his way to the anti-Obama "Operation American Spring" rally in 2013 and is well-known in the "patriot" movement, said he had been receiving damaging information about Cooper, Payne and Brian "Booda" Cavalier -- all of whom he described as loose cannons -- from multiple sources.

"Cooper" "Booda" and Payne. The truth about BURNS OREGON. I stand behind my video. It is factual

The 57-year-old Texan, who is not at the Oregon standoff, said in a pair of videos that he supported the cause -- but he disagreed with their strategy and the leaders the militants had chosen.

He said Cavalier was a "mean motherf*cker" with multiple drunken driving convictions, and he said the Arizona tattoo artist had insinuated himself with the Bundy family and "scared off" anyone who tried to get close to them.

"You never served in the military and you said you did," Hildinger said. "When you were called on it, you said, 'I'm sorry they said that,' and when someone stood up and said, 'No no no, sir -- we're accusing you of stolen valor,' you said, 'You've got your job to do and I've got mine.' Lying is not a job, sir -- so you're squashed. I'm glad I don't know you."

Hildinger said Payne was lying about serving as an Army Ranger and had three sealed criminal charges against him, and he cautioned the militants to stay away from him.

"You're a liar, sir -- and I have a special message," Hildinger said menacingly. "Jay LeDuc says, 'How's that patch working out for you now, bitch?"

But he saved his harshest criticism for Cooper -- who he accused of being a federal informant who got border militiaman Kevin "KC" Massey arrested on firearms charges.

"KC Massey is locked up, he's still got 41 months to go, Blaine -- and I have no doubt that it was your mouth that put him there," Hildinger said. "I don't know what KC thinks, but I'm sure that he hopes you live forever."

WATCH: ‘Pissed as hell’ rancher blows up at Bundy militants, tells them ‘I’m not going let some other people be my face’

Hildinger said Cooper, whose real name is Stanley Blaine Hicks, had amassed 16 felonies under his birth name and another felony under his chosen name -- which is the name of Jesse Ventura's character in the 1987 movie "Predator."

Those include multiple counts of assault -- both with and without a deadly weapon -- and making threats, along with several alcohol- and traffic-related offenses, and Hildinger accused Cooper of stealing thousands of dollars of photography equipment from the border militia's Camp Lone Star.

"Everybody's got a past, but goddamn, boy -- you're a habitual criminal," Hildinger said.

Maureen Peltier, the disabled National Guardswoman who describes herself as the official spokeswoman for the militants, claimed in a Facebook post that the felony record belongs to Cooper's father -- but court records show Hicks was born in 1979, as Cooper was.

Hildinger said Cooper had failed to correct the inaccurate perception that he was a U.S. Marine veteran.

"F*ck you," Hildinger said. "Hear me, Blaine -- you're a paid informant. You have no visible means of employment. You support a family, a house and you travel the country."

He said Arthur and his friends had traveled from Arizona to collect a homeless veteran that Cooper and others intended to use to spark a violent confrontation with federal authorities.

"Blaine Cooper, you're not smart enough to be an op," Hildinger said. "You're a paid informant -- you're there to get people killed."

Hildinger urged Ritzheimer, who he considers a "badass Marine," to cut ties with Cooper before he got them both in trouble or even killed.

"Jon has a family, a younger wife a little baby," he said. "They were crying yesterday and they were talking to me about you, brother, but said you wouldn't listen, you wouldn't come home. You're surrounded by informants."

An Illinois man was charged with a hate crime after police said he physically and verbally abused two Black store clerks.

The 58-year-old white man, whose name was not released by the Macon County Sheriff’s Office, got into an argument with one of the clerks Monday afternoon at Casey’s General Store, and he began hurling racist and homophobic slurs at the 24-year-old employee, reported the Herald-Review.