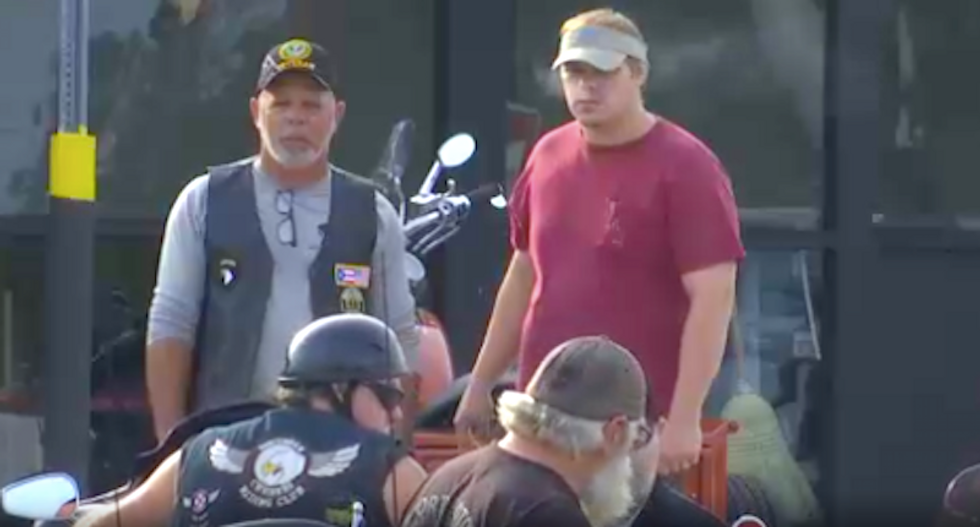 More than 150 bikers rallied over the weekend to support police officers who violently arrested a black woman earlier this year at a Waffle House restaurant in Alabama.

Sunday's demonstration was organized in response to protests against police brutality prompted by the April 19 arrest, which police defended as justified, reported WALA-TV.

Police arrested Chikesia Clemons in April at the Saraland eatery after she argued with employees over a 50-cent fee for plastic utensils with her order, and video shows the woman's breast was exposed and an officer threatened to break her arm during a struggle.

Officers say Clemons and her friend threatened Waffle House employees and refused to leave, but attorneys for the woman have disputed that claim.

Event organizer Kenda Fenton-Todd sided with police and invited motorcycle enthusiasts to show their support for police in the racially charged incident.

"With all the controversy a due to the recent arrest of by the young lady, it was just necessary to show these people that we support them," Todd said. "You can't just walk into an establishment and be belligerent and threatening and hostile and not suffer the outcome of getting arrested. We just felt that it was necessary to show these guys that we back them."

Todd said Clemons, who was charged with disorderly conduct and resisting arrest, should have expected to be violently taken to the floor and stripped partially nude in front of other customers.

"You either obey the law and you comply or things happen," Todd said. "They did their job. They had to do their job that's what they're trained to do."

"It was unfortunate that the young lady's wardrobe had exposed herself," she added. "But under the circumstances, like I said, if you don't comply with the law then you're going to get manhandled whether you're a woman or a man."

The bikers gathered for breakfast at the restaurant and then rode to the Saraland Police Department headquarters, where they waved flags and signs showing support for police officers.

"We bring peace," Todd said. "We're all about peace so we're not here to raise a ruckus or anything. We're just here to fellowship orderly and have breakfast and show these guys that we love them."

Beatrice King, the youngest daughter of the Rev. Martin Luther King Jr. and CEO of the King Center, has called for a boycott of Waffle House over Clemons' arrest and three other race-related incidents in recent months at the chain's restaurants.

A white gunman killed four black customers April 23 at a Waffle House in Antioch, Tennessee, and a black customer was locked outside of a Pinson, Alabama, restaurant while white customers were served inside.

A police officer choked a black customer last month in Warsaw, North Carolina, after he said employees called him racist and homophobic slurs during an argument over an unwashed table.

A new analysis out Monday reveals that far-right dark money groups and donors are pouring millions into secretary of state races across the U.S. this election cycle, far outpacing such giving in previous years and a worrying sign that Trump's 2020 "Big Lie" has grotesquely altered races for powerful state-level posts that could control the fate of the nation's democratic future.

Compiled by Ian Vandewalker and Maya Kornberg for the Brennan Center for Justice, the new report found that across six battle­ground states with secret­ary of state elec­tions in 2022, "fundrais­ing by candid­ates contin­ues to outpace recent elec­tions."

Pro Publica
Forty members of Congress on Monday asked the IRS and the Treasury to investigate what the lawmakers termed an “alarming pattern” of right-wing advocacy groups registering with the tax agency as churches, a move that allows the organizations to shield themselves from some financial reporting requirements and makes it easier to avoid audits.

Reps. Jared Huffman, D-Calif., and Suzan DelBene, D-Wash., raised transparency concerns in a letter to the heads of both agencies following a ProPublica story about the Family Research Council, a right-wing Christian think tank based in Washington, D.C., getting reclassified as a church. Thirty-eight other lawmakers, including Reps. Adam Schiff, D-Calif., Debbie Wasserman Schultz, D-Fla., Rashida Tlaib, D-Mich., and Jamie Raskin, D-Md., signed onto the letter.

“FRC is one example of an alarming pattern in the last decade — right-wing advocacy groups self-identifying as ‘churches’ and applying for and receiving church status,” the representatives wrote, noting the organization’s policy work supporting the overturning of Roe v. Wade and its advocacy for legislation seeking to ban gender-affirming surgery.

The state’s Government Transparency and Campaign Finance Commission advanced the investigation into the New Georgia Project and New Georgia Project Action Fund following Monday’s preliminary hearing. The nonprofits are accused of skirting financial disclosure laws by spending money on campaign flyers and election canvassing, which would have required them to file reports with the commission on $4.2 million in contributions and $3 million of expenses between 2017 and 2019.