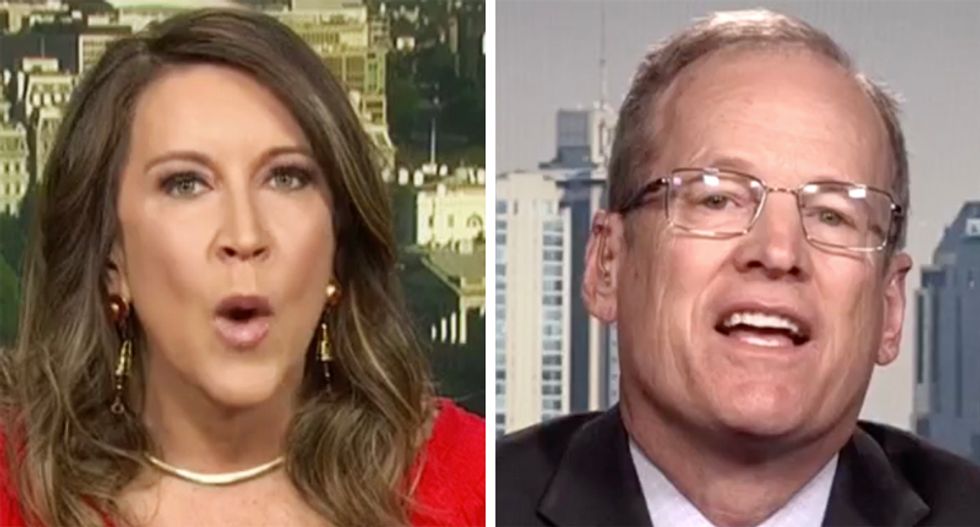 A furious Maria Cardona battered CNN conservative Jack Kingston on Saturday morning for his party's horrific treatment of immigrant children ripped from their parent's arms  as the ex-lawmaker tried to blame Democrats for President Trump's policies.

Sitting with New Day host Martin Savidge, former GOP Rep. Kingston (GAS) said he didn't like seeing what was happening with the children who are being separated from their parents and held in what has been described as "internment camps' but that the Trump administration's hands are tied because of laws Democrats refuse to fix.

"As somebody who has voted on immigration reform and worked for immigration reform and sat in the legislative chair, you need to know the history," Kingston offered. "We can skip that and say that we do have a choice in the House between two pieces of legislation. just as there was a choice this year, January of 2018, when the president offered the Senate a deal and the Democrats rejected it."

"The reason why you have this Alien Transfer Exit program is because there was no wall in the rural areas," he continued. "That's the reason it's there. What you do is you try to have something that will deter people coming in that area and push them into an area where they will enter illegally."

Calling the Trump policy of child separation "disgusting," Cardona lit into Kingston and his fellow Republicans.

"Well, in order to stop this horrific, pure evil policy that we are seeing right now that has separated up until now in the last six weeks at least 2,000 children from their families, many of which have been taken from the arms of their mother while they are breast-feeding, many of which, many mothers have been lied to saying --" she began before Savidge cut her off, asking, "With all due respect, we have gone over this, what are democrats going to do?"

"Let me be very clear, Martin, the Democrats don't have to do anything," she shot back. "Do you know why? Because this is a policy that President Donald J. Trump has put forward by himself. This is not a Democratic law and you know this. You have been batting down that debunked myth."

She then turned her ire directly on Kingston, exclaiming, "Jack, just admit it, that the president and Republicans are holding these children hostage as a pure negotiating tool to get through the rest of their draconian policies."