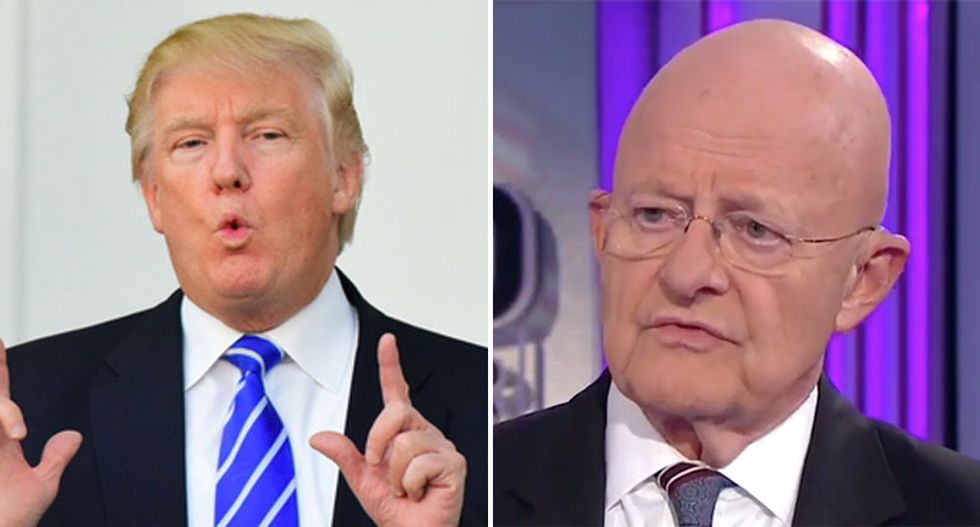 In an interview with Bloomberg News to promote his new book, former Director of National Intelligence James Clapper harkened back to America of the late sixties and predicted protesters would flood the streets like they did during the late Vietnam years if President Donald Trump fires special counsel Robert Mueller.

According to Clapper, Trump is "a manifestation of a larger issue in this country. He is just emblematic of it. I think the loss of what I'll call the beacon of truth – where now it's fashionable to have alternative facts or where 'truth is relative,' to quote Rudy Giuliani – this is very dangerous for the fundamental underpinnings of this country."

Asked, "The biggest [hypothetical] on everyone's mind is whether Trump would fire Robert Mueller, the special counsel investigating Russian influence in the 2016 election. Do you have any sort of specific thoughts on what would happen if he tried that?" Clapper explained it would throw the country into a crisis not seen since war in Vietnam tore the U.S. apart.

"I think if he did, it would set off a firestorm and create a constitutional crisis," Clapper explained. "I think you'd have people in the streets, not unlike what I went through post-Vietnam – that was my war, Southeast Asia."

"I think his strategy, which he's not very subtle about, is rather than do that he will simply try to undermine the investigation and undermine Mueller," he elaborated. "And so that regardless of what he comes out with, many in the public, particularly those who are in the Trump base, will not find it credible. And I think that's probably the more likely approach because I think he understands the firestorm it would create if he actually fired Mueller"

Clapper also defended ex-President Barack Obama for not taking information to the public when intelligence agencies came to him with evidence of Russian involvement in the 2016 election.

"Given the highly charged contemporaneous environment of the campaign and Mr. Trump alleging that the election would be rigged against him, the president for good reason was reluctant to feed that narrative," he explained. "He also didn't want to amplify even more what the Russians were doing by calling attention to it. But I think the biggest inhibition for President Obama was he did not want to be seen as putting his hand on the scale in favor of one candidate and in disfavor of the other."

He added that they also had their hands tied because they wanted to secure "a bipartisan buy-in on what the Russians were doing."

Ne noted he did make a statement on Oct. 7 -- "the same day that the 'Access Hollywood' audio tapes came out, and our message got completely lost."