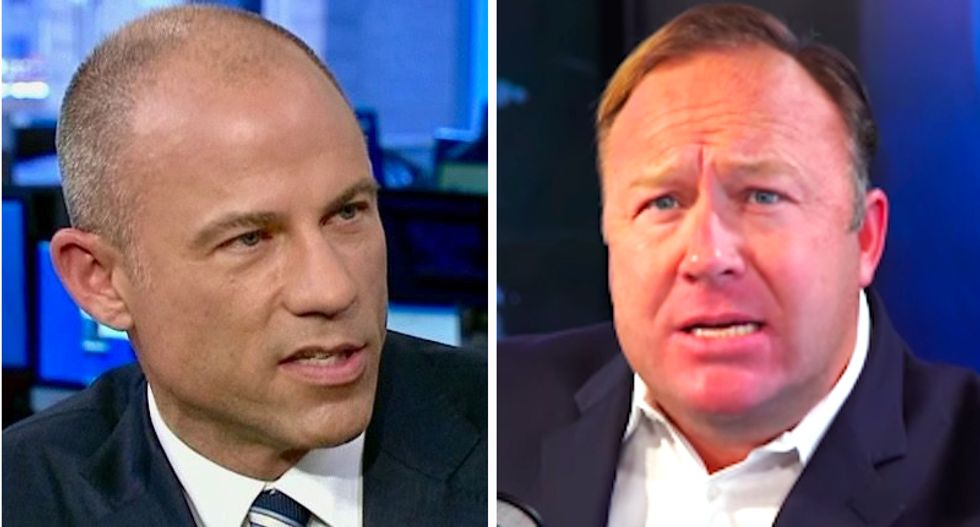 According to a report in Newsweek, the ex-wife of Infowars founder Alex Jones is seeking a high-profile attorney to take over her contentious child custody case with her former mate.

Jones and his ex, Kelly Jones, have been involved in a contentious divorce dating back to April, when the conspiracy monger took to social media to plead his case with his followers.

According to the new report, Kelly Jones is sending out feelers to media-savvy attorneys Michael Avenatti and Gloria Allred -- both of whom are representing clients who are facing off with President Donald Trump in court.

In an interview with Newsweek, Kelly Jones said, she is seeking  sole managing conservatorship of the Jones’ two young daughters and teenage son, but feels undermanned with her current attorney.

She notes that her husband is currently being represented by a team of eight attorneys in the case being held in Travis County, Texas, with one of his lawyers being Wallace B. Jefferson, a former chief justice of the Texas Supreme Court.

Kelly Jones called attention to her husband's recent run in with Sen. Bernie Sanders (I-VT) in a Los Angeles airport, saying her husband frantic chase of the Vermont politician was done with his kids in tow, which she called “irresponsible and endangering.”

“This is the kids' vacation with their dad, out chasing around this politician and broadcasting it to make everything about him on their vacation," she added.