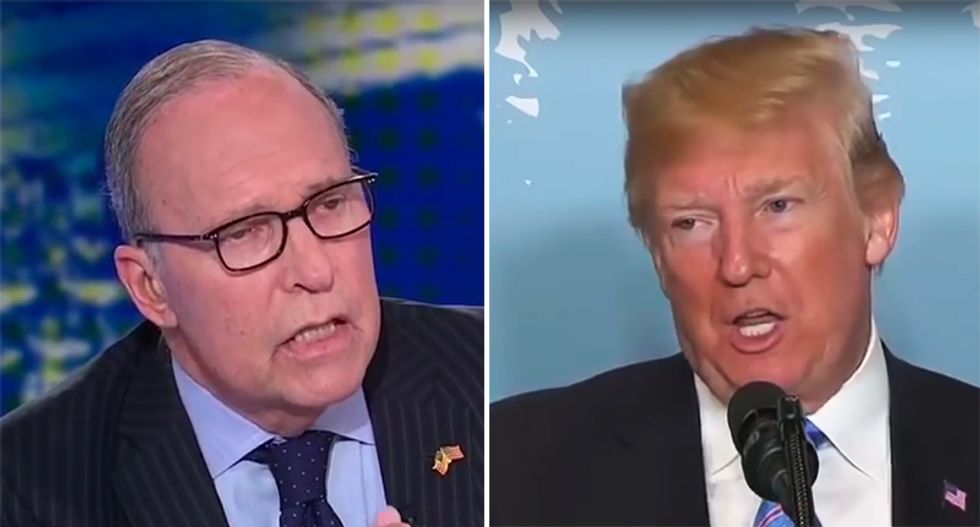 A longtime friend of President Donald Trump's economic adviser, Larry Kudlow, rolled his eyes at his pal's manic Sunday morning attack on Canadian Prime Minister Pierre Trudeau, saying his buddy could have accidentally benen "telegraphing" the fact that it was all about putting North Korean strongman Kim Jong-un on notice that Trump is not a wimp.

"Look, your reaction to all this. you've worked with Larry Kudlow. Do you believe him when he says Justin Trudeau stabbed the U.S in the back of these negotiations?" Witt asked.

"I consider Larry a good friend. I've known him for almost 30 years and no, I don't believe him," Insana began with a rueful smile.

"I'm also a little worried he telegraphed the whole thing was just an act just to look strong before the meeting with Kim," he continued. "Now President Kim or Chairman Kim, whatever you want to call him, knows it was a false moment, if indeed it was."

"I'm shocked we're focused on things like dairy subsidies, that this is a point of contention with one of our closest allies. This G7 meeting is in some ways unprecedented -- we've never not signed a communique," he added.

"I don't think that this is in the best interest of the united states, to take this approach," the financial analyst expounded. "I think among the president and his team, there's a staggering degree of economic incompetence here, when you're threatening your closest allies with tariffs not only on steel and aluminum. But as [NBC contributor] John Harwood said earlier, on automobile [tariffs], that would be a major blow to North America if something like that took place."

"Larry is an avowed free trader, and his about-face is somewhat shocking," he concluded.