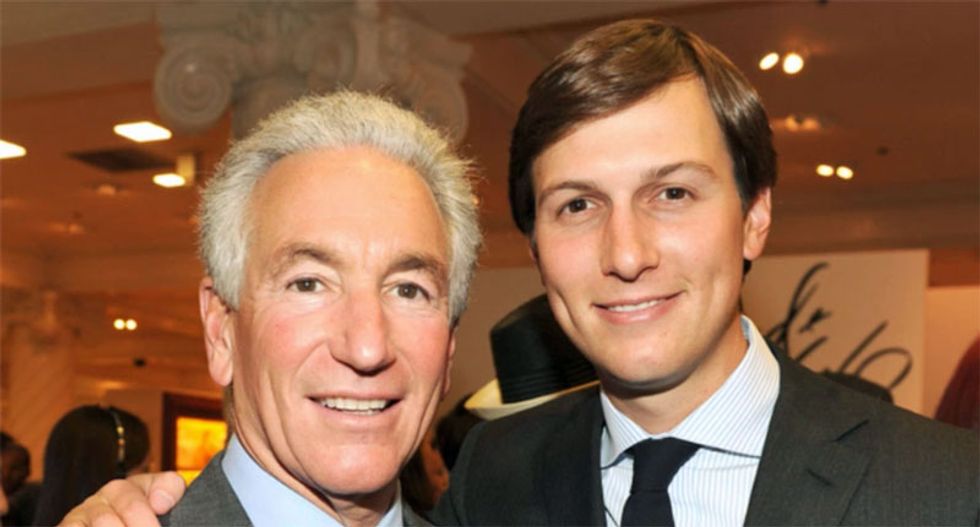 Jared Kushner's vision for upgrading his family's real estate empire from the suburbs of New Jersey to the glitz of New York City is quietly being undone by his father, Bloomberg News reported Friday.

Back when he was 25-years-old, Jared Kushner made it clear he wanted to be a New Yorker, shunning his native New Jersey.

In 2006, the New York Sun reported that the "real estate scion" was "quietly expanding his investment portfolio in Manhattan."

Jared Kushner told the tabloid that he'd received calls from New York politicians after he purchased the New York Observer.

That vision of moving the troubled family business across the river is now being undone.

His father, Charles Kushner, has now been retreating from the Big Apple.

In an only-in-New-Jersey crime story, Charles Kushner hired a prostitute to seduce his brother-in-law while secretly filming the encounter -- then had the sex tape sent to his sister.

Jared took over the family business when his father was sent away. Now that Jared is away in DC, his father is making big changes.

"Ever since Jared Kushner, the family’s chief Brooklyn booster, left to join the administration of President Donald Trump, his father-in-law, Kushner Cos. has sold out of several of the high-profile properties," Bloomberg News reported. "Meanwhile, Charles Kushner, Jared’s father, has reverted to what he knows best: buying suburban apartment complexes in his home state."

One of Charles Kushner's transactions last year was to team up with Israel-based Psagot Investment House to buy back a 1,032-unit apartment complex in Plainsboro that the family had owned until a 2007 sale, Bloomberg News noted.

“This is all about money laundering,” Bannon said in Fire and Fury. “Mueller chose [senior prosecutor Andrew] Weissmann first and he is a money-laundering guy. Their path to f*cking Trump goes right through Paul Manafort, Don Jr and Jared Kushner... It’s as plain as a hair on your face.”