Men and children packed into standing-room-only cells until they can’t tell day from night: detained teen 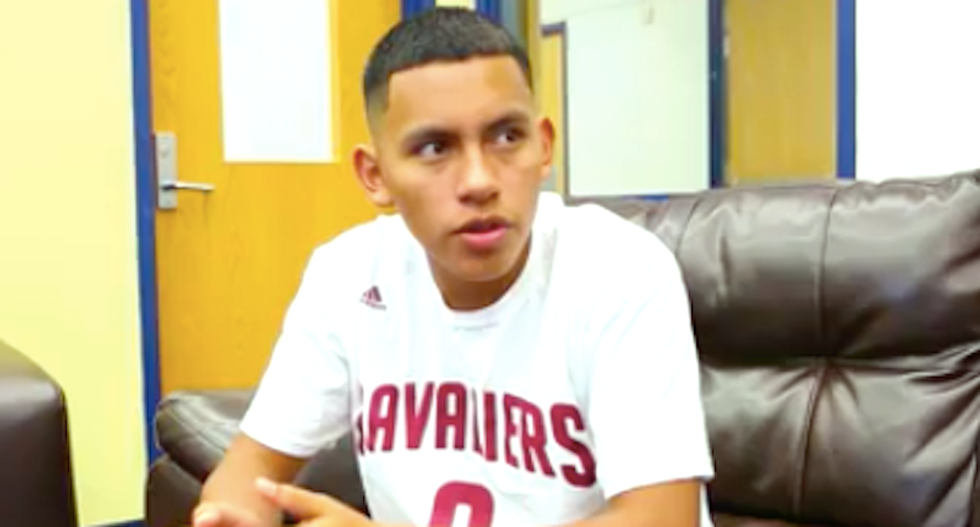 A Guatemalan teen who spent nearly three weeks in immigration detention facilities described the torturous conditions he experienced before being allowed to join his family in Ohio.

Edmilson Aguilar Punay was arrested about a month ago after climbing a 15-foot border wall and illegally entering the U.S. at Yuma, Arizona, and Border Patrol took him to a holding facility in Phoenix, reported the Cincinnati Enquirer.

The 16-year-old was packed into an office-sized room with about 30 young men and boys, some as young as 5 years old, and kept in the windowless space with a single toilet in the center.

"The smell was very bad," Edmilson said. "It wasn't even separated by a wall. They said we had air conditioning, (but) it was very hot in the room."

“I saw boys, women, pregnant women, women with children, children by themselves, and men," the boy said through an interpreter. "They put us in a room, and this room was rounded-up young men. And they brought the kids in.”

One boy cried and screamed for his mother after Border Patrol agents left him in the cell, the teen recalled.

"We asked him, 'What is your problem? How can we help?'" Edmilson said. "He said, 'They took my mom away from here.' We called an immigration officer, and we asked her about this child's mom. And they told him, 'Your mom is there. She will come later.'"

The child didn't believe her.

"The 11-year-old boy said, 'No, his mom is not coming back because she was deported to Guatemala,'" Edmilson said. "And they left this child there by himself. There were other rooms where there were just children in the same situation. Their parents were (deported)."

The teen said he soon lost track of time in the windowless room, where detainees were unable to tell day from night.

The small room sometimes became so crowded that he was forced to remain standing for hours, and sometimes he was able to briefly squeeze onto a couch to rest or eat.

The detainees were fed sugary fruit juice or undercooked pre-packaged containers of chicken soup, and Edmilson said he rarely used the toilet.

Eventually, he was taken by ICE agents to another room and questioned about his mother, who has lived in Cincinnati for a decade but does not have legal status.

Two more days passed, and Edmilson was taken on a short bus ride to another detention center, likely operated by Southwest Key, and given fresh clothes and access to a shower.

He was then flown from Arizona to the New York City area, where he was placed in the Children's Village Shelter, a private facility were an 11-year-old Guatemalan boy was reportedly sexually assaulted in 2013 by an older child.

Edmilson was flown June 6 to Cincinnati to join his mother and three siblings and two aunts.

Immigrant rights activists plan to help the teen file an asylum claim to remain the U.S., but Edmilson said he remains haunted by the terrorized screams of young children housed in the hot and crowded room.

"You could just hear cell phones ringing and children crying," he said. "Where there were small children, you could hear them crying all the time."

The German parliament will for the first time on Friday focus its annual Holocaust memorial commemorations on people persecuted and killed for their sexual or gender identity.

Campaigners worked for two decades to establish an official ceremony for LGBTQ victims of the Nazis, saying their experience had long been forgotten or marginalised.

At the Stalingrad Battle Museum in Russia's southern city of Volgograd, dozens of teenagers stand in a circle, waiting to take oath as they join the patriotic Youth Army movement.

Dressed in beige trousers and red berets, the children stand in rows in the building's iconic Triumphant Hall, decorated in white marble and symbols of the Red Army crushing the Nazis.

From "The Sixth Sense" to "Old", director M. Night Shyamalan has had a unique string of hits, but these days he works outside the Hollywood studio system, which he says has grown "sick".

Balancing art and commerce has always been the great game of Hollywood and few have played it as well as Shyamalan, who returns to cinemas next week with the apocalyptic horror tale, "Knock at the Cabin".