MSNBC reporter shocked by Trump's child jails: 'One of the most despicable moments in modern American history' 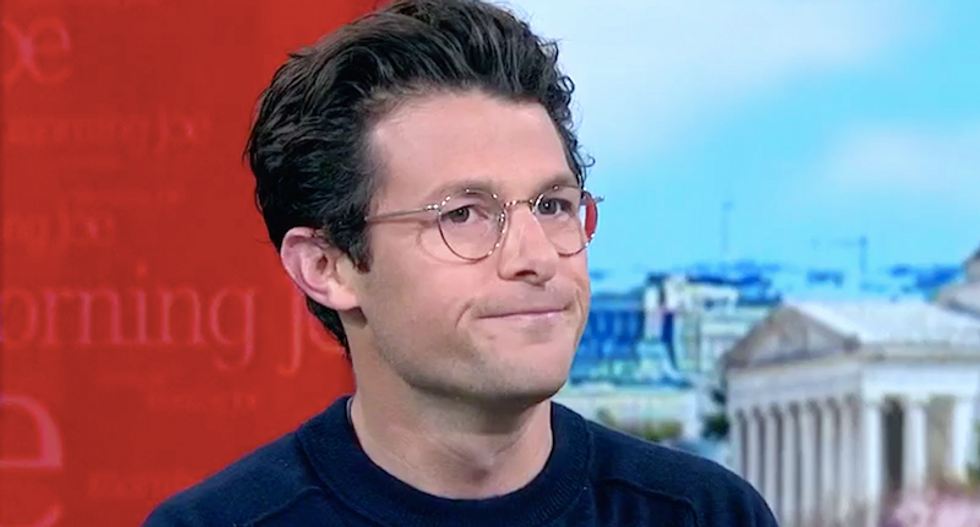 MSNBC's Jacob Soboroff is one of the only reporters given access to the child detention camps operated by the U.S. government, and he was horrified by what he saw there.

The reporter appeared Friday on "Morning Joe" to process the experience, which he said was the most unnerving in his life.

"I witnessed one of the most despicable moments in modern American history," Soboroff said. "I saw kids locked in cages, sitting on floors, supervised by security guard contractors in a watch tower in McAllen, Texas."

"I will never forget it," he added. "I don't think the American people should forget what happened because this should never, ever happen again. It's the worst thing that I've ever seen in my entire life."

Trump apologists have downplayed the conditions the children are forced to endure without their parents, and Fox News broadcaster Laura Ingraham compared the facilities to summer camps.

"It's just wildly inaccurate," Soboroff said. "The first place I went is a former Walmart where kids are inside 22 hours a day, they get outside two hours a day. That was luxurious compared to what I saw (Thursday) in McAllen."

"I just wish the first lady, when she was there, would have been able to go and actually see that facility," he continued, "not the New Hope shelter, where kids are well taken care of. HHS takes care of the kids. They are social service providers, that's what they do."

"The border patrol, where we saw the cages, it is horrifying," Soboroff added. "It's 55,000 square feet on one side of parents and unaccompanied minors, and a huge number of those unaccompanied minors were taken from their parents and sitting there by themselves. What happened to those kids? Where are they now? Some of can kids that I saw there, we literally don't know where they are. The 500 that have been reunited, there's still 2,000 of them."

On Tuesday, The Washington Post reported that Dominion Voting Systems' lawsuit against Trump ally and attorney Rudy Giuliani alleges he profited off of his voting machine conspiracy theories — by using them as a platform to hawk various products to Trump supporters.

The Dominion lawsuit seeks $1.3 billion in damages for harming the company's reputation with false claims that their voting machines were rigged, which has reportedly led to harassment and threats against their employees.

In an interview with the Washington Post's Jonathan Capehart, the son of the founder of Stormfront and the godson of former KKK leader David Duke attempted to explain the undercurrent of white supremacy that led to the storming of the U.S. Capitol by Trump supporters on Jan. 6th.

With columnist Capehart asking if it was "too wide of a brush" to paint the pro-Trump extremists as white supremacists, Derek Black said the crowd reminded him of the neo-Nazi "Unite the Right" uprising in Charlottesville in 2017.

According to Black, the movement is not going away and more can be expected of followers of the extremist ideology despite arrests.

"After a few years, we're going to see them popping up again. And that's something we should expect. And those are people we can say they are part of the white-nationalist movement. They have the ideology, they have the world view of a social movement that goes back for decades and has a lot of imagery and common cause and a lot of the same ideas and figures over and over again," Black stated while clarifying that the storming of the Capitol as lawmakers were attempting to certify the 2020 presidential election was not necessarily a "white-nationalist rally in the same way that Charlottesville was, but it was fused with white nationalism, anti-Semitism, and this ideology of white supremacy."

With Capehart suggesting that Trump tapped into white supremacist's grievances to not only get elected but to build his loyal following, Black concurred.

"There was a back-and-forth between Trump and a lot of the far-right white-supremacist organizers who have benefited from him is that his organizing made it easier to rally people to the cause of white power because a lot of the things he said were exact mirrors of what people within white nationalism say, and that makes it safer," he explained. "I think it's probably more accurate to say that he identified the power of it, and he leaned into it. And not everybody who supported him is a white-nationalist sympathizer, even, obviously, but the way this works is that the ideas that they spread are very potent and do cater to a much, much larger group in America than people who are actually white nationalists. Their whole agenda is to create talking points, to create messages that will then appeal to people who have more latent, almost like common racist ideas, and tell them to make that more extreme, more a part of their identity, more explicit."

As for the insurrectionists being defended as "regular everyday people" concerned about the government as opposed to hardcore militia members, Black stated that, just because people don't belong to militias, that doesn't mean they aren't hardcore white supremacists at heart.

"I grew up really familiar with the white-nationalist movement, and its membership is broadly made up of people who are heads of their own small business, who run a car dealership, who are lawyers, who are doctors, who have advanced degrees, and that level of education and income making you a middle-class American does not insulate you from fully believing the ideology of white supremacy, that I think we kind of fall into that, saying that there are white nationalists and neo-Nazis, and then there are like normal Americans who are getting caught up in it," he told Capehart, before adding, "I would not be surprised as we get more into the backgrounds of people who are being outed and arrested now, if we realize that they're both a surgeon and a longtime contributor to white nationalism."

An unrepentantly racist Florida woman was recorded hurling racist abuse at two Black men she saw working, and her only regret is not saying the N-word often enough during the encounter.

Gina Brashear used the racial slur six times in the short video clip posted online after she saw the two men unloading sheet metal Saturday from a semi-truck, which she complained was blocking her Lehigh Acres driveway, reported WBBH-TV.