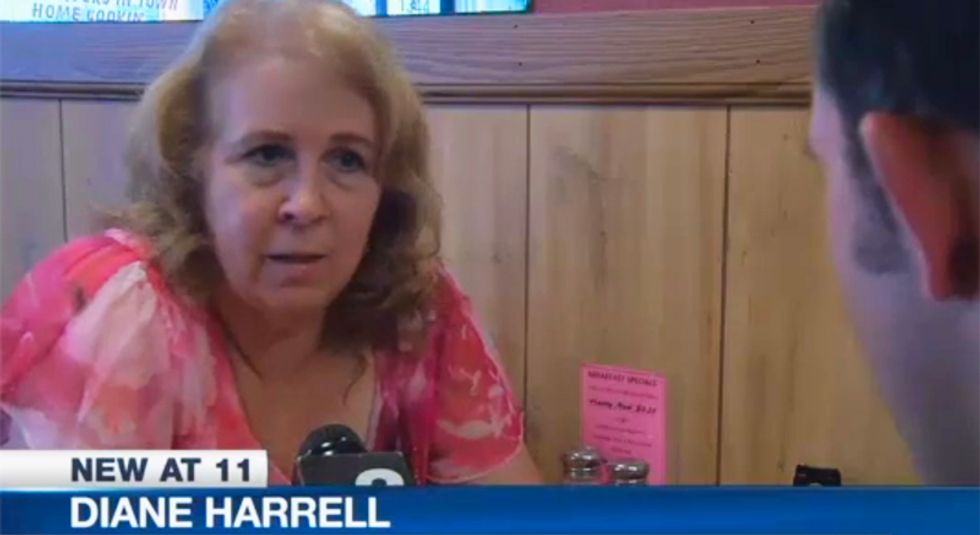 The owner of a Florida cafe that specializes in 'home cookin' is pleading for understanding after her husband called a gay couple "disgusting," reports Queerty.

According to the report, a woman and her partner were eating at the Country Roads Cafe in Lehigh Acres last weekend when the restaurant owner , 77-year-old Bill Harrell, strolled over to them to tell that he found them “disgusting,” because he is a Christian.

Writing on Yelp, one of the women -- identified as Taylor K. --  described the encounter, stating, "Today I was at Country Roads Cafe in Lehigh enjoying lunch with my girlfriend when the OWNER of the place came up to me and told me he is a Christian and I am disgusting."

Calling it "eye opening," she added, "The sad thing is  I'm not even hurt by it. I'm shocked at how ignorant people are today. How can you be an owner of a place and  just treat you customers like that."

Queerty reports that co-owner Diane Harrell gave what amounted to no apology at all for her husband, blaming his outburst on his age.

“I’m not saying that what he did or said was right, but you just gotta understand that the world is different than was back when he grew up as a child,” Harrell explained. “Things were totally different back then.”

Customers and other Yelp users are not having it, with one writing, "Just discovered on the early morning news the owner is a homophobic and transgender bigot. You think because he’s 77 that’s an excuse? I’m 78 and had enough upbringing to respect others as I wish to be. Degrading people for who they are is disgusting.”

The report states that Bill is trying to make amends -- fearful that the restaurant will suffer under new owners who are taking over in July.

"My eyes were opened, and I learned a lot from this experience,” he recently wrote. “Come back in, and I will apologize in person.”

With a bent back and bare feet in the black soil, Ruben Gutierrez Escobar, 63, uses a hoe to plow his fields in Bella Vista, a hamlet near Cusco in southern Peru at an altitude of 3,500 meters.

He has no tractor, no fertilizers, only "sweat, work and sacrifice."

If you are hired to work in Senator Kyrsten Sinema's office on Capitol Hill there is a 37-page memo you'll want to read detailing all the responsibilities her staffers are required to perform, from getting her groceries, calling Verizon and going to her D.C. home to wait for a repair person if the internet goes out, scheduling massages, and ensuring her very detailed airplane requirements are met.

“It is your job to make her as comfortable as possible on each flight,” the memo says, as The Daily Beast first reported in December.