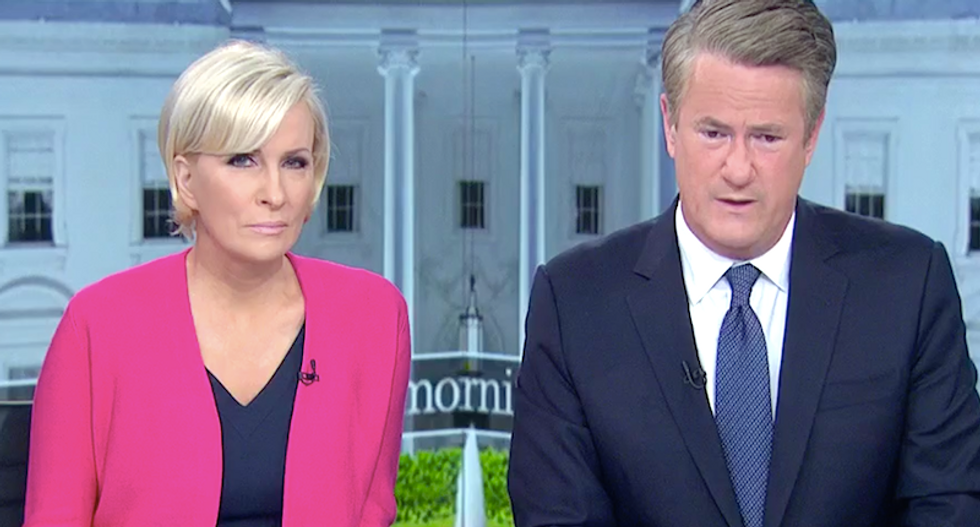 MSNBC's Joe Scarborough challenged Republican lawmakers to push back against President Donald Trump's increasingly bold attempts to place himself above the law.

The "Morning Joe" host warned congressional Republicans that Rudy Giuliani, the personal attorney for the president, had crossed a red line over the weekend by claiming Trump could have assassinated former FBI director James Comey and escaped punishment.

"I understand that Republicans and Democrats on Capitol Hill watch this show a good bit -- a lot of times in the gym," Scarborough said. "Hi, how are y'all doing?"

Scarborough pointed out the chyron at the bottom of the screen, which read, "Giuliani: Trump could shoot Comey and not be indicted."

"I want you to see the graphic at the bottom, because this is what Rudy Giuliani said this weekend," he said. "Rudy Giuliani, who is speaking on behalf of the president, who is speaking with the president's blessings and hasn't been called back for saying this, parallels what Donald Trump said during the campaign, that he could shoot somebody on Fifth Avenue and not lose people's support -- except now we're in the legal realm."

Scarborough said every Republican running for re-election should be asked about Giuliani's comments, and he said each of them should condemn the former New York City mayor for suggesting the president could assassinate his political rivals without repercussion.

"This is what Vladimir Putin does," he said. "This is not what United States presidents do."

Richard Haass, longtime president of the Council on Foreign Relations, warned that Trump and his allies had moved past trying to delegitimizing the special counsel investigation and were claiming extra-constitutional powers -- and co-host Mika Brzezinski shuddered.

"And the right to murder now?" she said.