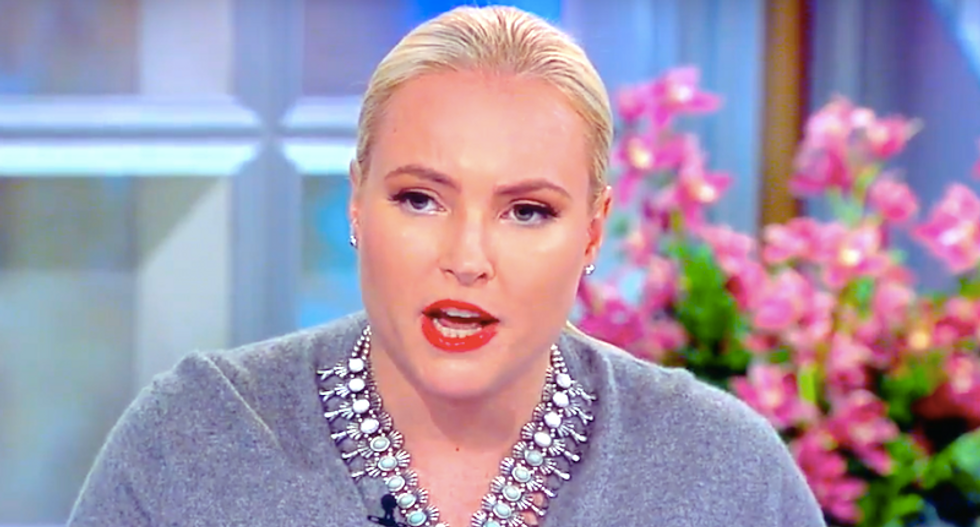 "The View" co-host Meghan McCain admitted President Donald Trump was acting like a "dictator," but she blamed Democrats for failing to come up with a message strong enough to stop him.

McCain and co-host Joy Behar sparred over this week's "Time" magazine, which shows the president seeing himself as a king in a mirror -- but they didn't exactly disagree over the illustration's premise.

"Don't delude yourself how popular he is," McCain said. "He's very popular, his base of support has never been stronger, and that 'Time' magazine cover moves the needle absolutely no place."

Behar said the cover illustration was accurate, particularly after the president repeatedly insisted this week that he has the "absolute right" to pardon himself in an effort to end the special counsel investigation.

McCain didn't dispute the underlying point, but she wasn't all that concerned.

"I made the argument he acts like a dictator," McCain said.

The conservative panelist said she wasn't as worried and upset as her colleagues because the abuses illustrated by the cover hadn't yet cut into Trump's base.

"I'm not as riled up at this table about this cover," McCain said. "It's not moving the needle of your argument, why you think he's a dictator. It is not resonating -- it isn't."

Behar said Trump supporters in red states probably didn't read "Time" anyway, and McCain mocked her concerns and blamed Democrats for not coming up with a message to attract the GOP base.

"If you're this scared, if you're up all night and can't sleep, you're up all night," McCain said, "and we're in the seventh circle of hell under the Trump presidency, if I were a Democrat right now, I would be coming up with different ways to start communicating with the middle of the country, which as far as I can see, you are not."