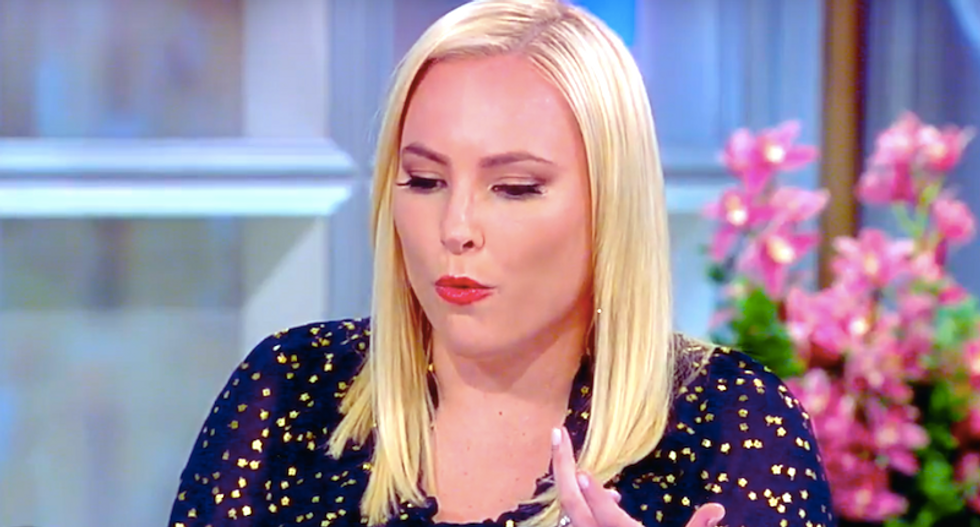 "The View" co-host Meghan McCain said the various scandals engulfing President Donald Trump were too confusing to understand -- but she got promptly corrected by Joy Behar.

Panelists discussed Trump's tweets Monday morning claiming an "absolute right" to pardon himself and questioning the constitutionality of the special counsel probe, and McCain admitted the situation was too complicated to care about.

"I think there is just this cacophony of information, and it's hard for even me to follow, which I'm open and frank about on this show," McCain said. "I think people are just, like, well, you know, if somebody happens, maybe."

She said the scandals had only drawn Republicans closer to Trump, who enjoys near-universal support within his own part.

"But 87 percent own party (support), that's almost a statistical anomaly, and going forward it's hard for me to even imagine -- we are the party of Trump completely," McCain said. "It's hard for me to imagine what an election looks like still defending this when most majority of voters --"

Her co-host Behar cut in and asked what was so hard to understand about some of Trump's defining scandals.

Host Whoopi Goldberg said Republicans backed Trump because they believe "they're winning," and McCain excused Trump's legal claims as too crazy to be true.

"With the investigation and, like, I could possibly pardon myself," McCain said. "Again, what crime are you talking about? We're, like, collusion is not a crime. What exactly are you talking about? I think (Rudy) Giuliani to a point, I don't think he is a great surrogate, but we were talking about it this morning. You guys do because he is sort of like shifting the blame in this way where nobody is really understanding what's going on."

Co-host Sara Haines told McCain she should be more concerned about what Trump and Giuliani were saying.

"I think he used the idea of shooting (James) Comey, if Trump were to shoot Comey, and that's the language of a dictator -- sorry," Haines said. "He said, Giuliani said, 'He could even shoot James Comey in the Oval Office and did still not be prosecuted. That's a scary statement."