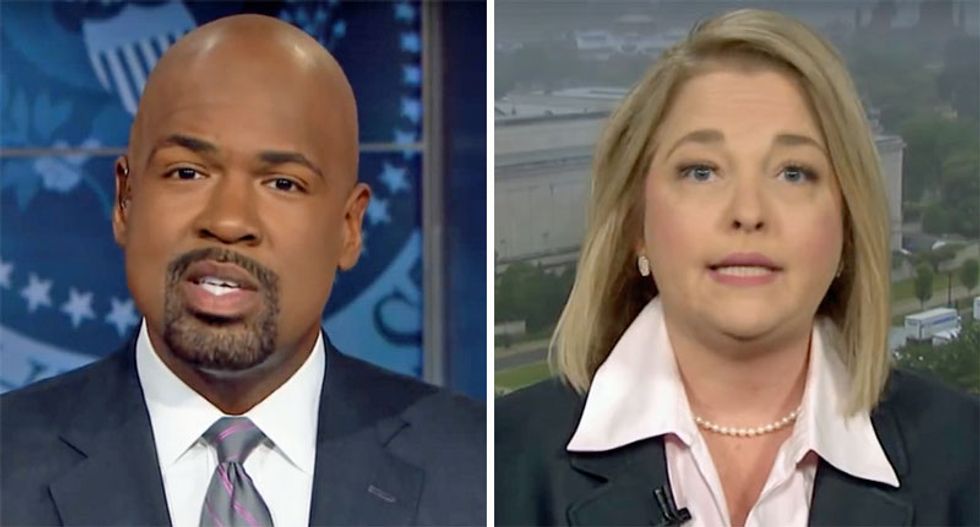 Amy Kremer, a former Tea Party leader and failed Republican congressional candidate, was repeatedly called out for untrue statements made about immigration during a contentious interview with CNN anchor Victor Blackwell on Saturday.

Kremer, the co-founder and chair of Women for Trump, answered the first question with "as a mother" as she blamed parents for seeking asylum in the United States.

"Do you believe that a Honduran mother loves her child, cares for her child, any less than you do for yours?" Blackwell asked. "How can you claim, or criticize a mother, for coming and doing what she thought was necessary to save her child's life, to save her life, giving up everything they know to come here?"

Kremer also said that President Trump has no obligation to reunite the families that were separated by his policies.

Then Kremer tried to claim that Trump had not actually changed anything, but had just continued a policy from the Obama administration.

"Any non-partisan objective fact-checker says that what you are telling people right now is not true," Blackwell noted.

"You are wrong," Kremer shouted in response.

Blackwell and Kremer argued over what was said in an interview with former DHS Secretary Jeh Johnson that aired on CNN earlier in the week.

Kremer claimed that Johnson admitted family separation was an Obama-era policy, Blackwell said that simply was not true.

"The control room is watching this, we'll get the sound bite and we'll play it for the viewers," Blackwell promised. "We will settle this one."

"I know I'm getting the wrap," Blackwell continued, touching his earpiece. "But I'm taking more time."

By the time the segment was winding down, the CNN control room had found footage of the interview in question, which Blackwell played. It proved he had been correct, that Trump's family separation policy was new and not a continuation of previous administrations.

"Well, I don't have the ability to pull up what I read, but it happened," Kremer claimed.