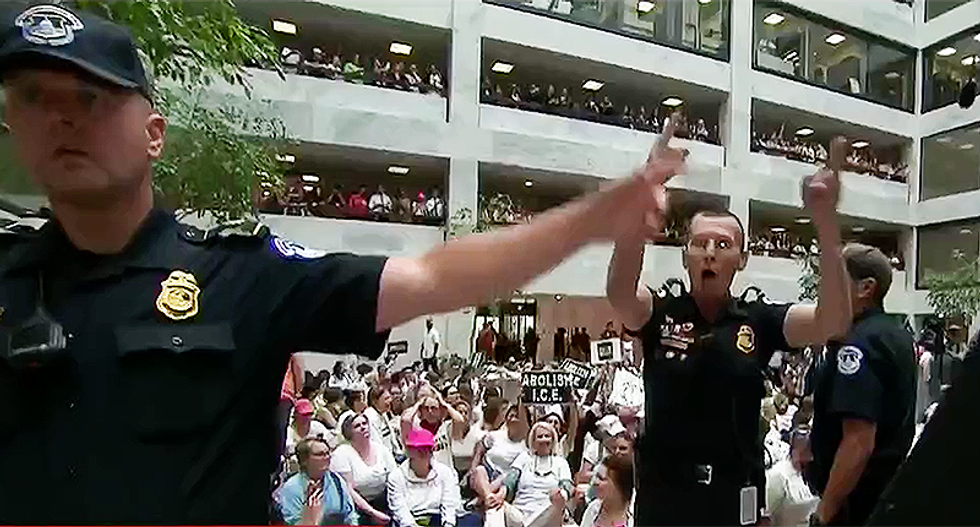 Women marched on Washington Thursday from the Justice Department across the city to the Heart Senate Office Building. when they arrived they began chanting "we care," as a response to first lady Melania Trump's jacket she wore to the border last week in Texas.

The capitol police were called in and announced via bullhorn to the protesters that they would be arrested. They were given three opportunities to leave and did not. Upon the third warning police began to move in and the women sat down on the floor prepared for arrest.

At that point, CNN's cameras and reporters were told to leave or they too would be arrested. They pushed back reporters as the cameras continued to film, but they didn't leave and continued filming.

As women were marched into a line with their hands up, Sen. Mazie Hirono (D-HI) came downstairs and spoke with some of the women. She seemed to be taking selfies and hugging some of the women. Thus far she has been the only lawmaker to join the protesters. She told CNN she wanted to show solidarity with them and give them a pat on the back.

While the protest took place the balconies filled with Capitol Hill staffers, some of whom were watching the spectacle while others jointed the protest.

"They essentially stopped work for many of these Capitol Hill staffers," the CNN reporter said.

The sit-in continued as women wrapped themselves in mylar blanket similar to the ones given to children at the border in the detention camps.

After arresting about 40 protesters, the capitol police continued to push back media even further.

Watch the protest below: