Charles Koch says he has ‘regret’ about backing some GOPers: ‘I don’t care’ if Democrats take back the House 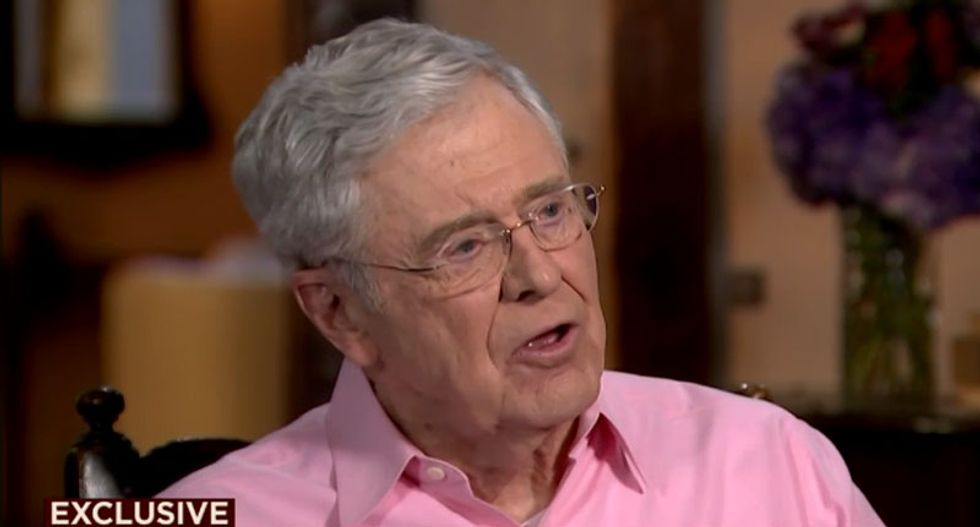 In a rare interview with reporters at a conference he is hosting in Colorado, billionaire conservative Charles Koch admitted that he may have backed some wrong Republicans in the past election, and wouldn't object to the Democrats reclaiming the House from the GOP.

On Saturday, a spokesperson for Koch and his brother David, expressed anger at President Donald Trump's trade war and the divisiveness he has brought to the country, saying it is bad for business.

“The divisiveness of this White House is causing long-term damage,” explained Koch  exec Brian Hooks told reporters. “When in order to win on an issue someone else has to lose, it makes it very difficult to unite people and solve the problems in this country. You see that on trade: In order to get to a good place on trade, convince the American people that trade is bad.”

During a surprise -- and rare -- chat with reporters on Sunday, Charles Koch doubled down by admitting he and his brother are taking a harder look at who they back in the future.

According to Tarini Parti from Buzzfeed News, she asked Koch about the protectionist policies adopted by the Trump administration and whether he regretted backing lawmakers who support them.  Koch admitted that in the future he would be "much stricter" about who he donated to and that he planned to hold anyone he backed "accountable."

Asked if he would support Democrats, Koch replied, "I don't care what initials are in front of or after somebody's name," and that a Democratic majority House was something he could live with.

According to CNN's Leigh Ann Caldwell, Koch also took some responsibility for where the country has gone, saying, "We all bear responsibility" for the "divisiveness in the country," but said, when asked about Trump: "I’m into hating the sin not the sinner."

You can see their tweets from the press availability below:

I asked Charles Koch about the GOP supporting a protectionist agenda that goes against what he's advocated for and… https://t.co/mcvSccpFdn
— Tarini Parti (@Tarini Parti) 1532887599.0

Charles Koch also said: "We all bear responsibility" for the divisiveness in the country. But is Trump to blame fo… https://t.co/pzLb7svCKV
— Leigh Ann Caldwell (@Leigh Ann Caldwell) 1532887695.0