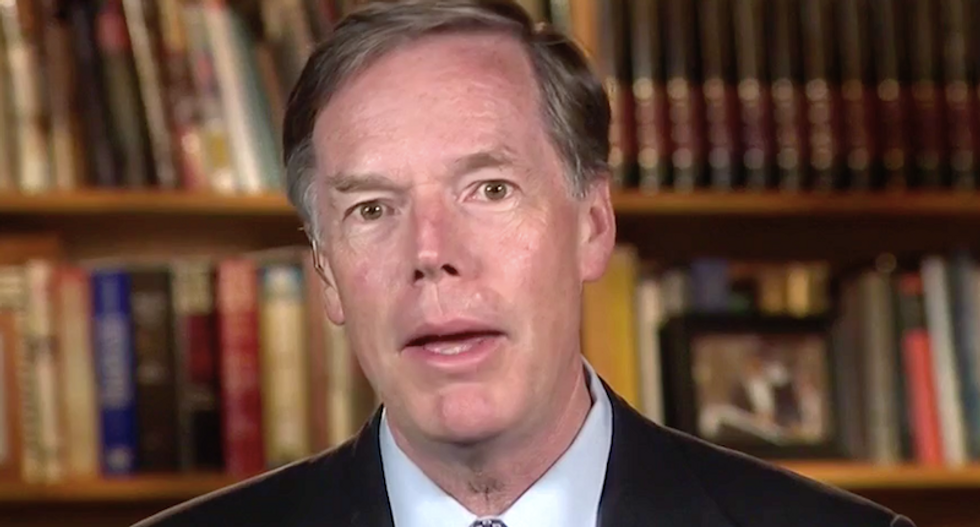 Panelists on MSNBC's "Morning Joe" recoiled in horror as they watched President Donald Trump rant against Germany and other NATO allies at a breakfast event opening an annual summit.

Host Joe Scarborough said the president was obviously and clumsily trying to impress Russian president Vladimir Putin, whose longterm strategic goal is to weaken or break up the North Atlantic Treaty Organization.

"This was supposed to be just a photo op," Scarborough said. "The president wanted to make sure that he sent the message to Vladimir Putin while appearing to question energy shipments to Russia, that he was actually doing everything he could to disrupt the NATO summit from the start, and to also undermine America's alliance with NATO."

Nick Burns, who served as ambassador to NATO under George W. Bush, strongly condemned the president's statements and behavior.

"It's just infuriating to watch this happen," Burns said. "You cannot imagine any American president, all the way back 75 years, deciding to become the critic-in-chief of NATO. I mean, it's Orwellian. He's making our friends out to be our enemies and treating our enemies like Putin as our friends."

Burns said the president misrepresented the facts about NATO and defense spending, and he said the U.S. relied heavily on the strategic advantage gained by American military bases in Europe.

"It would cost us more money to bring the troops home than to keep them in Europe, so what is the point of this?" Burns said. "It's all about politics, and the president's base, not about the power of the United States. This incredible alliance that we've built, every president from Truman -- it's infuriating to see this happen. It's diplomatic malpractice."

Secretary of State Mike Pompeo and White House chief of staff John Kelly looked on in embarrassment as Trump complained that Germany enjoyed a trade relationship with Russian while the U.S. paid for a portion of its defense under the Cold War-era treaty.

"Donald Trump is just, once again, ignorant of history," Scarborough said. "Ignorant of diplomacy and of the very things that have gotten us to a position where we have a $19 trillion economy, and by far the most powerful military and economic engine in the world, on the planet."

Scarborough said the tirade may fool Trump supporters who are as ignorant of world affairs as the president seems to be, and historian Jon Meacham agreed that he seemed to be trying to turn supporters against the alliance.

"It's diabolical in that it almost manages to create as much chaos as possible," Meacham said, "not really creative chaos, but create chaos, because, if you listen to that, you know, basically we have a president who sounds like the guy at the end of the bar who has a bee in his bonnet and on about his third or fourth beer."

"He's laying this out in a way that his base, many people in his base, will repeat, because he's saying it," Meacham continued. "They're going to like the idea he was sitting there talking to this guy with a funny accent -- they're going to love that."