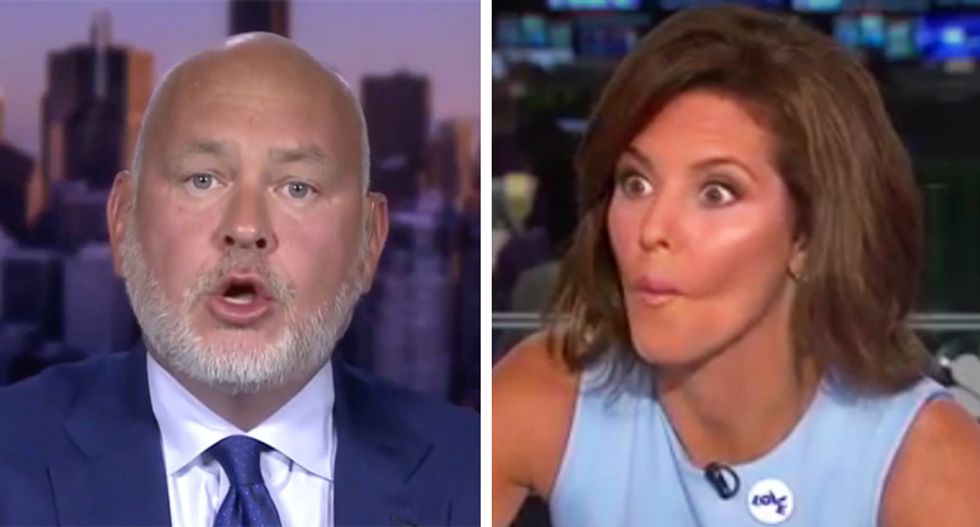 Two conservatives appearing on an MSNBC panel hosted by Stephanie Ruhle went to a new level of outrage at where President Donald Trump has taken their party after his disastrous press conference with Russian President Vladimir Putin, with one going so far as to call for the president to be censured by Congress.

Following a montage of clips of Fox News hosts appearing disturbed and distraught at Trump abasing himself in front of Putin in Helsinki, GOP strategist and now-former Republican Steve Schmidt launched an attack on Trump before turning to GOP lawmakers who are standing by watching the president destroy their party -- and the country.

"It's the musings of an imbecile" Schmidt said of Trump's press conference in Helsinki. "Trump is what the Russians call a 'useful idiot,' someone in service to the Russian Federation, either unwitting or wittingly."

"For the first time in the history of the United States, you have an American president who is absolutely unwilling to defend the country from a hostile foreign power that has attacked it," he exclaimed. "He is faithless to his oath of office. We watched Sen. Jeff Flake (R-AZ) and you watch Sen. Olympia Snowe (R-ME) and Sen. Ben Sasse (R-NE) and a couple of others [criticize Trump]. What we know for sure is that the Congress under this Republican control is as feckless to American ideals, to the Constitution, to the country, as Donald Trump is."

"So Jeff Flake and Snowe and Sasse and all the rest of them can say 'disgraceful, bad, terrible,' but they actually have power to do something about it," he explained. "This is an extraordinary moment, and the Congress is absolutely unwilling to exert oversight over this president. So Sasse and Snowe and Flake have it in their power to cut a deal with the Democrats to remove Sen. Mitch McConnell from power, who's up in this up to his eyeballs as well."

"He [McConnell] was informed before the election that the Russians were meddling by President Obama and refused to take any action on it as well," he added.

Republican strategist Evan Siegfried went a step further, calling on Congress to officially censure the president, but also warned that Republicans who oppose the president may pay at the polls as Trump loyalists turn on them.

According to Steve Schmidt, "So what?" adding voters should either be on "Team America or Team Putin."

Watch the videos below via MSNBC: