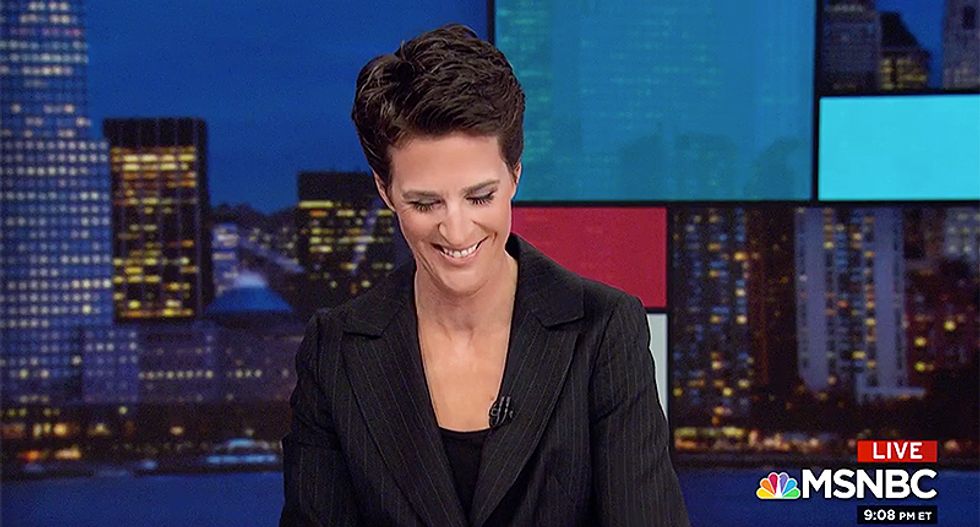 Last week, while preparing for his trial, Manafort asked the judge for a long delay, saying that it caused a burden that he was in a prison so far away from his attorneys.

"It generally takes over two hours each way by car for counsel to visit with him," the court filing read. "This has affected the upcoming trial. The detention has made meetings for his attorneys far more time consuming."

"The reason I am being a little snarky about that, a little suspicious of whether or not that's the real reason, is because of what happened next after they applied for that delay on that basis," Maddow continued. "Today, this morning, surprise! The judge in the Paul Manafort case said, 'Sure!' Called his bluff. The federal judge hearing Manafort's case in Virginia, weighing this request to delay the trial because Manafort is at this faraway jail cell, the judge said, 'Oh, that's the issue? Your jail cell is too far away? No problem. I can solve that. I'll move to you a closer jail cell.'"

Manafort was in a VIP cell in Northern Neck Regional Jail, so the judge said the accused could move a little closer to home to another jail, which would likely not be as nice. Within hours of the decision, Manafort's lawyers decided he could stay at the northern Virginia facility.

The "problem," and the judge's solution, prompted Maddow to laugh out loud. She noted that the Alexandria Detention Facility that the judge was happy to send Manafort to was the same in which 9-11 conspirator Zacarias Moussaoui was held.

Maddow noted that nothing else in Manafort's trial is going his way either. The same judge denied efforts by Manafort to hide what was in a storage locker. He tried to have evidence from his locker suppressed in the Washington, D.C. case too, it won't be. She said that it appears Manafort is reaching the end of his rope.

At the same time, retired Lt. Gen. Michael Flynn was in court Tuesday. The judge in the case is annoyed that the case isn't closed as special counsel Robert Mueller continues his investigation.

"It means his case can't come to a close, he can't get his final sentence until prosecutors say they're done with him and they give judge the opportunity to weigh the extent of his cooperation so the judge can decide how much punishment Flynn ought to get," she explained. If indeed he's ready to be sentenced it means the government is finished gathering information from him. The hearing today clarified the confusion and Flynn is not finished with the special prosecutors.

"Flynn's defense lawyer told the court bluntly, the government came to us and indicated they were not yet prepared to proceed to sentencing," Maddow said. "The judge said, 'That's fine. I don't have any problem with that whatsoever. None whatsoever.' Flynn's lawyer said, 'Gen. Flynn is eager to proceed to sentencing when that is possible but under the cooperation agreement, it is really up to the government to make that recommendation.' The defense lawyers said, 'He wants to bring that chapter of his life to a conclusion.' And the court says, 'As does everyone facing sentencing.'"

She then brought up Trump's Justice Department nominee Brian Benczkowski, who worked for Alfa Bank, a Russian bank that was featured in the Christopher Steele dossier and was found to have strange computer communications with a computer in Trump Tower. Benczkowski is refusing to agree to recuse himself from anything having to do with the Russia investigation in his role at the DOJ.

Meanwhile, the president has nominated a possible Supreme Court Justice that once wrote that he believes Congress should write legislation preventing a sitting president from being prosecuted for anything.