How native American dogs disappeared -- and left a contagious cancer behind 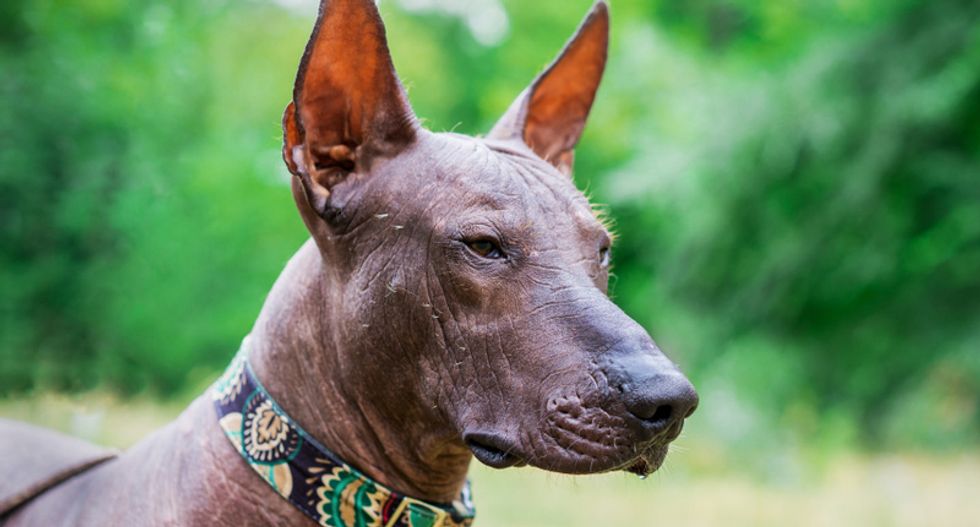 Portrait of a Mexican hairless dog of xoloitzcuintli breed. (Shutterstock)

Cancer can be frighteningly complex and unpredictable. Cancer can evolve, change, evade and resist, but one thing we can usually rely on is that cancer can’t infect. For a handful of unlucky species, however, this isn’t the case. Thousands of dogs around the world – from Aboriginal camp dogs in Australia to street dogs in Buenos Aires – are affected by an extraordinary type of infectious cancer that causes genital tumours and can jump between individuals, known as Canine Transmissible Venereal Tumour or CTVT.

All of these tumours are clones - genetically highly similar to one another but genetically distinct from their hound hosts. DNA from the tumours can trace them to a single individual, the “founder dog”. This cancer arose only once, thousands of years ago, from the cells of this “founder dog” - an unsuspecting pooch. Since then the tumours have persisted through the millennia by transmission of cancer cells between dogs during mating. The founder dog has spawned a modern-day doggy cancer dynasty. This story begins and ends with the question of when and where this mysterious founder dog lived when its cancer lineage first emerged.

Preserved in every single CTVT tumour is ancient DNA from the long-dead founder. Previous research showed that this founder was genetically similar to modern Siberian huskies, Alaskan malamutes and Arctic sledge dogs and most likely belonged to an isolated population. This suggested that the answer to our question probably lay buried somewhere in the Arctic tundra. To dig a little deeper, we took DNA from ancient dog remains, spanning roughly 9,000 years of dog evolutionary history, from sites across North America and Siberia, and compared this with CTVT. What we found was a huge surprise.

Dogs were present in North and South America long before the arrival of European colonists. These pre-contact dogs were widespread across the continent, varying in size and shape, and were largely the only domestic animals associated with Native American groups. They were not domesticated from North American wolves but instead padded their way into the Americas from Asia alongside humans at least 10,000 years ago.

At this time, the landmasses now known as Russia and North America were not separated by water, but connected by a continuous expanse of land, the Bering Land Bridge. Humans and dogs dispersed together across this bridge into the New World. Evidence that these dogs were used in sledding, along with suggestions that they were used for hunting and hauling, means that they could have facilitated the early settlement of the Americas.

Barking up the wrong family tree

Previously the dog family tree was thought to be split into two evolutionary branches– dogs from East Asia, like Chinese village dogs and Tibetan Mastiffs, and dogs from West Eurasia, with modern Arctic dogs falling within both of these groups. However, once we added ancient dog samples to this family gathering we found that pre-contact dogs in the Americas, modern Arctic dogs and the elusive CTVT founder animal defined a new major dog “clade” – a genetically distinct group of organisms sharing a common ancestor.

The data suggest that east, west and Arctic dogs diverged at roughly the same time. Pre-contact dogs then split from their cousins in Siberia and remained isolated from other continental dog populations in the Americas until the arrival of Europeans. Although there is intriguing evidence that during this time these dogs interbred with wild canids endemic in North America, like coyotes and grey wolves.

No direct descendants of pre-contact dogs have so far been confirmed in modern populations. Genetic traces of these dogs have largely vanished, even when we look at breeds still considered to be “native American” like Chihuahuas, Mexican hairless dogs, and South American village dogs. While unsampled pockets of American dogs might still remain, what we’ve found so far suggests that they have been extensively replaced by European breeds.

Major factors leading to the demise of pre-contact dogs probably include susceptibility to European-borne diseases, systematic persecution by European colonists and a cultural preference for European dogs. Because of their isolation, the immune systems of pre-contact dogs may have been unprepared for the arrival of new pathogens. And, although CTVT could have arisen on the Asian side of the Bering Bridge, perhaps the emergence of transmissible cancer itself even played a role. Bizarrely, their almost total disappearance means that the closest living relative of these bygone dogs is now CTVT, an opportunistic, sexually-transmitted dog cancer that has hitchhiked around the world at least two times over.

Dogs have journeyed with us through changing times and cultures and to a large extent their histories reflect our own. Pre-contact dogs were present as the first travellers journeyed from Siberia into the Americas and began to thrive. These stalwart companions were also present as native cultures were disrupted, displaced, and declined over the last 500 years.

We set out to find the origin of the oldest known contagious cancer. What we uncovered were the last traces of ancient American dogs.

In an op-ed published by the New York Post on Sunday, January 24, Sen. Josh Hawley of Missouri complains bitterly about what he claims is "the latest form of cancel culture" in the United States: being lambasted for his unwavering support of President Donald Trump following the 2020 presidential election. But Hawley's op-ed wasn't buried deep inside the pages of the Post, which ran it as a cover story. And the far-right Republican and Trump loyalist is drawing a great deal of criticism for claiming that he exemplifies "the muzzling of America" in light of the fact that a major newspaper in the largest city in the U.S. gave him the front cover to make his bogus claims.

In his op-ed, Hawley writes, "On behalf of the voters of my state, I raised a challenge to the presidential electors from Pennsylvania after that state conducted the election in violation of the state constitution. Maybe you agree with me. Maybe you don't. But whatever your view, Corporate America's rush to cancel those it dislikes should trouble you."