'A total F-ing disgrace -- the president's lost his mind': Sickened conservatives turned off TVs as Trump sucked up to Putin 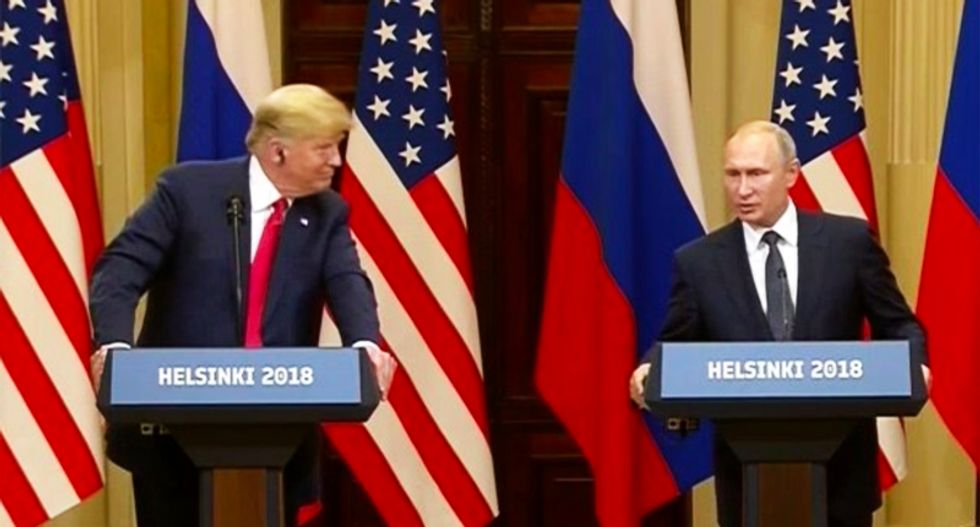 According to a report on Axios, the reaction to President Donald Trump's now infamous press conference with Russian President Vladimir Putin by conservatives was one of disgust and angst.

The press conference where the American president deferred to Putin and took the side of the Russians against the U.S. intelligence agencies already has conservatives furious, with Axios revealing that the negative response began before the Trump and Putin press conference had even ended.

The reports notes that CBS's Margaret Brennan -- who anchors Face the Nation on Sunday mornings -- claimed she was texting with some U.S. officials during  Trump's talk who said that had to turn their TVs off because it was going so badly.

Axios stated that they heard from a current member of Trump's own National Security Council who stated: "Dude. This is a total [effing] disgrace. The President has lost his mind."

Another former White House official admitted he stuck it out, only to admit afterwards, "Need a shower.”

The report goes on to note that staunch Trump defender Newt Gingrich also recoiled from the president's performance, tweeting,"President Trump must clarify his statements in Helsinki on our intelligence system and Putin. It is the most serious mistake of his presidency and must be corrected — immediately."