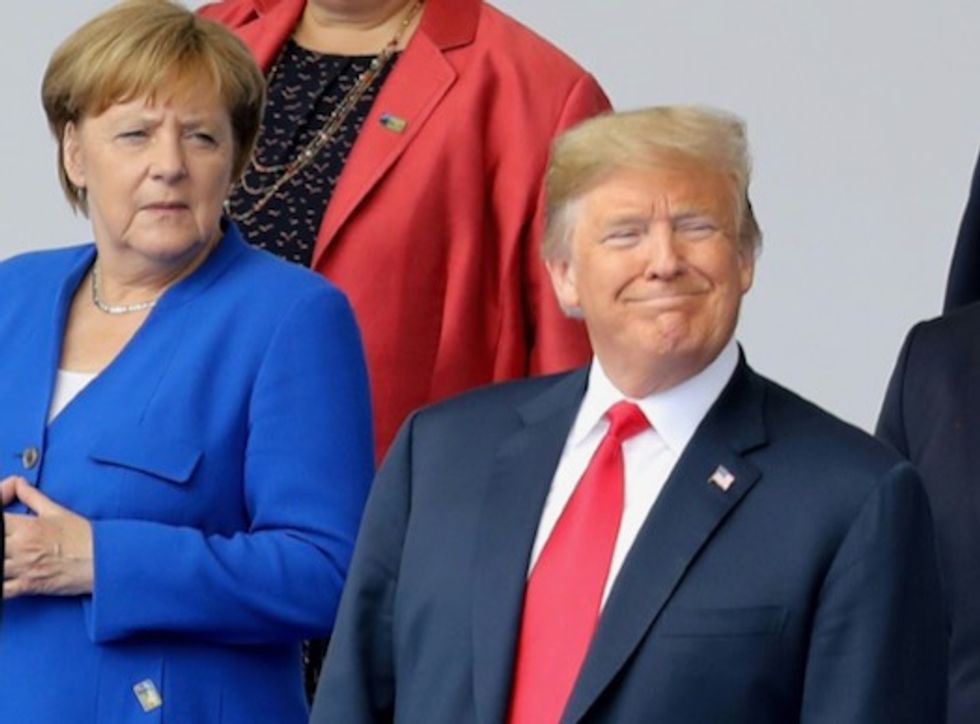 President Donald Trump brought his chaotic style of governing to the NATO summit in Brussels on Wednesday and Thursday, irritating and befuddling allies with charges and jibes before declaring success for convincing his counterparts to pay more for their mutual defense.

It was a classic performance for the one-time reality television star, whose “America first” mantra has translated into a sometimes-bullying style on the world stage, particularly with countries traditionally considered to be U.S. friends.

Even before the NATO summit was underway, he kicked off the summit with a broadside against Germany over plans for a natural gas pipeline with Russia and he stepped up his criticism of the alliance as a whole for not taking more of the financial burden off the United States.

He reinforced that tension through critical tweets, even as he held polite talks with German Chancellor Angela Merkel on the sidelines of the summit and made nice with other world leaders at a reception on Wednesday night.

“He was in a good mood, he said Europe was a continent he appreciated,” Luxembourg’s Prime Minister Xavier Bettel said of Trump at the evening event, at which leaders enjoyed an acrobatic display and saxophone music in a Brussels park.

But the next morning, the bad guy persona was back, prompting the first formal NATO crisis meeting since 2008 in which Trump aired his grievances in a leaders-only, unscripted session over the funding issue again, diplomats said.

One diplomat said something appeared to have irritated Trump, a suggestion from another leader or possibly a report in the news media that he had not gotten his way.

When he took the floor in the amphitheatre-like North Atlantic Council room for a session with non-NATO members Georgia and Ukraine, Trump began a 10-minute tirade, which several diplomats said became a rage.

He made very clear attacks against Germany and warned that if NATO countries did not meet a goal of raising their defense spending to two percent of their national GDP by January 2019, the United States would go it alone.

That outburst prompted NATO Secretary-General Jens Stoltenberg to ask Ukraine and Georgia to leave the room and, in a closed session, to try to get the carefully-choreographed summit back on track.

Trump continued his now familiar verbal attacks, saying too many U.S. presidents had failed to get Europeans to spend more on defense and that he wanted immediate results.

But French President Emmanuel Macron, with whom Trump is friendly, fought back and said the allies had to stick to the previously-agreed-upon 2024 target for their defense spending increases. He could not change France’s budget for next year, which he had just presented to parliament.

Merkel said it was “completely impossible” to meet the commitments by January in the crisis session that Trump himself later publicly described as “tough for a while”.

“It wasn’t easy for Merkel and the Germans to be treated as a villain,” said a NATO diplomat, adding that the overall mood within the organization was that this was “the new normal.”

By the end of that meeting, despite the pushback, Trump felt victorious.

During a hastily-convened news conference at NATO headquarters, the president declared that all was well and he believed in NATO. He said he was proud that his intervention had prodded other nations to step up their spending.

And with his free-wheeling opinions on Britain’s exit from the European Union at that news conference, Trump even forced British Prime Minister Theresa May into a public defense of her policies and to come out to speak to reporters, diplomats said.

“We’ve had a very amazing two-day period in Brussels,” Trump told reporters. “Everyone has agreed to substantially up their commitment. They’re going to up it at levels that they’ve never thought of before.”

In fact, allies had agreed to stick to the goals that had already been set before Trump became president and which NATO officials say have much more to do with fear of Russia than of the U.S. president.

But Trump was satisfied, at least for the time being.

“And now we’re very happy and have a very, very powerful, very, very strong NATO, much stronger than it was two days ago,” he said.