WATCH: Former Ambassador to Moscow is offended by Trump's abysmal ignorance about Russia 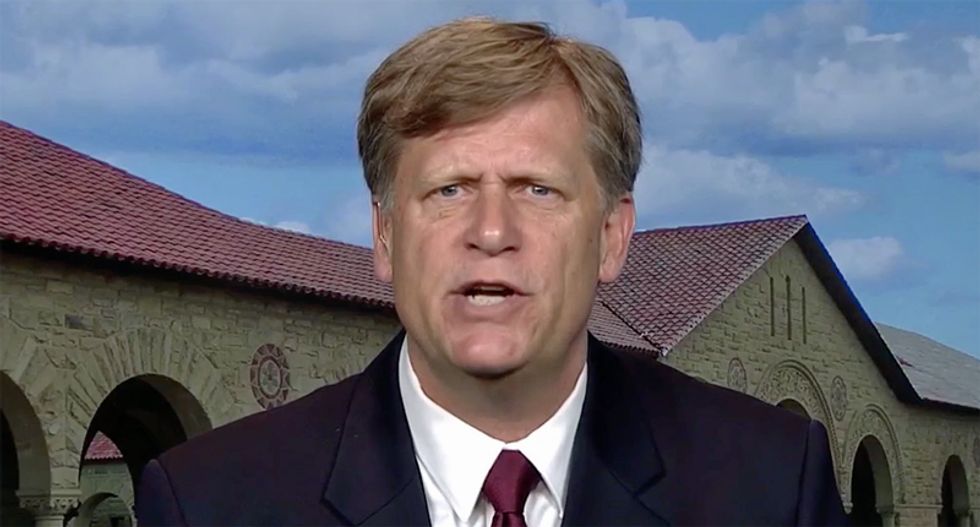 Stanford Professor Mike McFaul served as the United States Ambassador to Russia during the Obama administration.

The "scandalous" relationship between the Republican Party and Russian Federation President Vladimir Putin was brought into focus on Friday as America's former ambassador to Russia and a former four-star Army general slammed the party.

The anchor of "Andrea Mitchell Reports" on MSNBC played a clip of President Trump addressing supporters at a Thursday campaign rally in Great Falls, Montana.

"They're going, 'well, President Trump, be prepared, you know, President Putin is KBG and this and that.' You know what? Putin's fine," Trump claimed. "He's fine, we're all fine, we're people."

"Will I be prepared? Totally prepared," Trump added. "I've been preparing for this stuff my whole life."

"Not to my knowledge," McFaul replied. "It doesn't seem like he prepares for these meetings, there's no evidence of that whatsoever."

McFaul, now a professor at Stanford University, has been banned from returning to Russia. He had particular scorn for Trump's suggestion he may recognize Moscow's annexation of Crimea.

"All these are signals of concessions, and nothing in return," he observed. He beats up on our allies, he makes demands of them, and yet with people like Putin, he doesn't seem to be asking for anything other than a good meeting."

In the same campaign speech where Trump defended Putin, he also lashed out at the North Atlantic Treaty Organization (NATO) and German Chancellor Angela Merkel.

"I think probably the most frightening aspect is the roar of the crowd acknowledging these observations," suggested retired General Barry McCaffrey. "For the President of the United States to not understand the power of our defense and economic relationships with Europe and NATO, the European union, is simply preposterous."

The host also noted the delegation of Republicans who recently went on a junket to Russia.

"What are the risks of his going one-on-one with Vladimir Putin, especially after we saw that scandalous, I think, Republican bunch of senators going to Moscow and playing up to Foreign Minister Lavrov, not taking any Democrats with them, no one from foreign relations, no senior people from the defense committees -- appropriators who don't know foreign policy, trumpeting the president's policy of make nice to Putin," Mitchell said.

"So he just doesn't understand the nature of the alliance," he concluded. "I just worry he doesn't understand basic facts about American national security and he personalizes our diplomacy about him and his, you know, his good chemistry with Kim Jong-Un and maybe with President Putin -- this is about American national interest, he was hired to defend us and advance our interests, not just for him to have a good meeting with Putin."