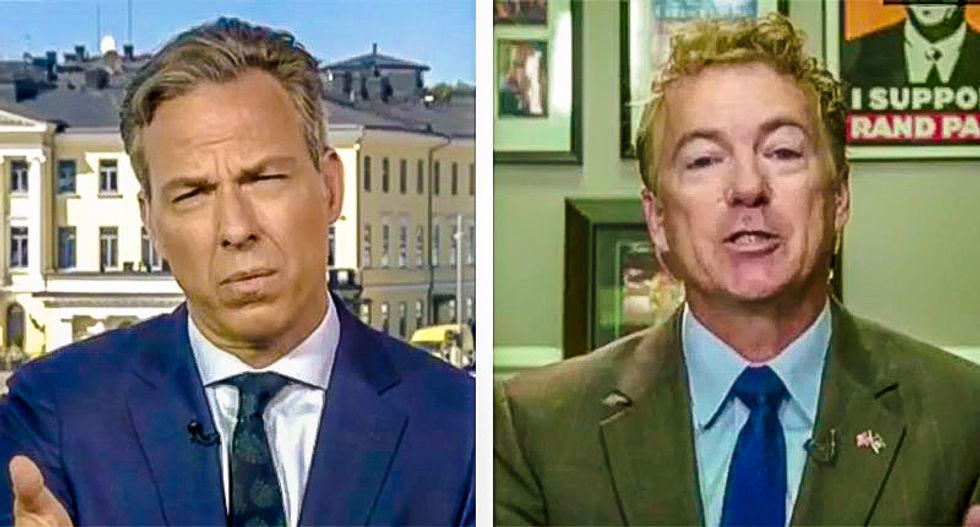 An extensive interview with Sen. Rand Paul (R-KY) -- who sits on the Senate Foreign Relations Committee -- concluded with CNN host Jake Tapper patiently explaining the purpose of NATO to the Kentucky senator who spent the greater part of the interview defending Russia.

With a waffling Paul alternately condemning Russia for interfering in the 2016 presidential election -- that vaulted Donald Trump into the presidency -- only to accuse the U.S. of interfering in elections elsewhere, the talk to turned to Trump's attempts to undermine NATO.

Paul's comments and defense of Russia seemed to stun host Tapper who gave the conservative a brief explanation on the differences between Russia and the mutual defense organization.

"I think there are a lot of people out there who would have been surprised to hear a sitting United States senator describe Russia versus NATO in terms of confrontation and expansion as a chicken or egg proposition given the fact that NATO protects sovereign countries while allowing them to remain sovereign while Russia invades other countries and takes over those countries," Tapper lectured.

"Right," Paul backtracked, before once again defending Russia. "Well, what I would say is that there were people -- probably the greatest diplomat of the last century was George Kennan, and he did predict that as NATO expanded you would incite militaristic tendencies and nationalism in Russia. I'm not justifying Russian aggression in the Ukraine or Georgia."

"I'm not saying they are equivalent," he added. "I'm saying though that the provocation of pushing NATO forward after we promised Gorbachev that the west would not go one inch beyond Germany. And yet and under the Clinton administration we kept pushing, pushing, pushing. For every action we put out there there is a reaction."