WATCH: Texas Dem goes line-by-line through all of Trump's links to Russia that have nothing to do with Peter Strzok 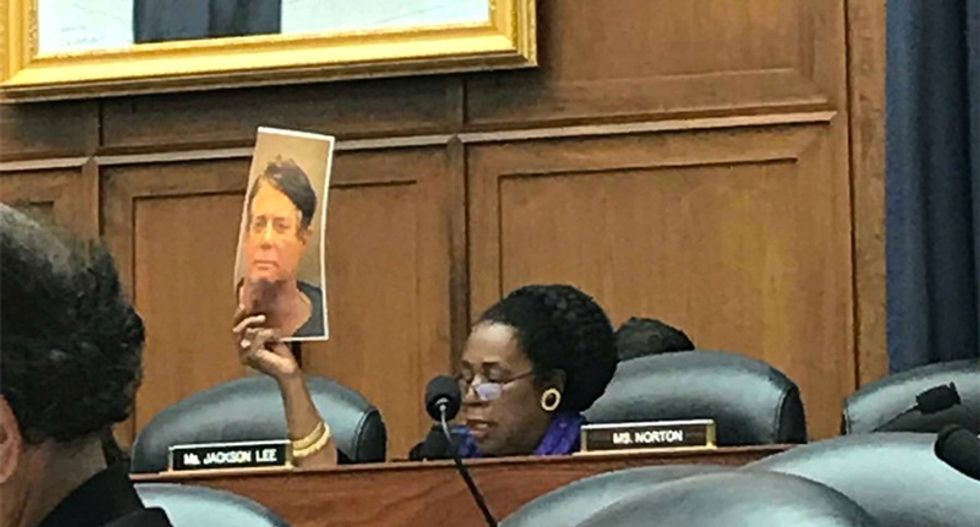 Rep. Sheila Jackson Lee (D-TX) went into full attack mode against Republicans for their line of questioning of FBI agent Peter Strzok. After a contentious morning of questioning that started off with a shouting match, Jackson Lee ended the first portion of the hearing with allegations that her colleagues were using Strzok as a means of discounting the Russia investigation.

"I hate no one," she began. "I do not hate the administration, the president, my colleagues. I honor this nation. So, I believe it is important that we stand on the force of truth and the Constitution. In the oversight of these two committees, it is unfortunate that none of these committees, Judiciary or Oversight, have decided to pursue more precious or more important issues than asking about Hillary Clinton's e-mails."

Meanwhile, she noted, thousands of children on the border are being "stolen away from their families" and the president of the United States is meeting with a foreign adversary.

"Foreign policy scholars are aghast that this president, one who famously refused to read his briefing materials, will be meeting with Mr. Putin. In addition, we're wasting time on the Clinton investigation rather than investigating the role that Russia played in the 2016 elections," she went on. "Unanimous and unassailable assessment of the intelligence community is that the Russians helped [President Donald] Trump over Hillary and intended to harm her."

She even cited that the Republican-controlled Senate Intelligence Committee agreed with that assessment.

"Unfortunately, the president and House Republicans do not agree," she continued. "The leader of Russia is known to have sanctioned murder of dissidents, jailed journalists, and this is the president who is described as easy to meet with. Neither the Judiciary Committee or the Oversight Committee has investigated the president indicating whether he can pardon himself. So, here we are, Mr. Strzok, to ask you questions."

She recalled watching him in the closed session hearing and said that he seemed to be a credible witness who loves America.

"Did anything you did or say in 2016 change the fact that Trump campaign associate Carter Page was under counter-intelligence surveillance going back to 2013? Anything that you did, yes or no?"

"Did anything you did or say in 2016 change the fact that in March 2016 the president met with George Papadopoulos, who would later plead guilty for lying to the FBI?" she asked.

"Did anything you did or say in 2016 change the fact that Donald Trump Jr. met with agents of the Russian government in Trump tower in 2016?" she asked.

Again, he answered it did not.

"Did anything you did or say in 2016 change the fact that the president asked Russians to hack into Hillary Clinton's e-mails?" she asked.

"Did anything you did or say in 2016 change the fact that Paul Manafort, who has pleaded guilty, in fact, that in July 2016 that Paul Manafort changed the GOP party platform at the 2016 GOP convention in order to benefit Russia or change the platform?" she asked, holding up Manafort's mugshot. As a fact-check, she incorrectly stating that Manafort has pleaded guilty. As of Thursday, he has not.

Ma'am, without saying whether or not that's accurate, no," he replied.

"Did anything you did or say in 2016 change the fact that in May George Papadopoulos was drunk in a London bar, bragging about how Russians had dirt on Hillary Clinton?" she asked.

"Without confirming that's accurate or not, no," he said.

"Did anything you do or say change the fact that when Donald Trump was presented with dirt on Hillary Clinton, he responded, 'I love it?'" she asked.

"Again, ma'am, only commenting on public accounts of that, no," he said.

"Did anything in the IG report change the fact that Donald Trump Jr. was communicating with Wikileaks' Julian Assange about the timing of releasing e-mails designed to harm Hillary Clinton?" she asked.

Again he replied it did not.

She asked if he knew that Michael Flynn had pleaded guilty, which he said he was aware of.

"Well, in his offense statement that we have right here, Mr. Flynn indicated that his statements, false statements and omissions, caused impeding the Russian investigation, but more importantly, I believe it's important to take note of the fact that he provided information to the Russian Ambassador that said, here, 'Calm down, don't bother to get upset about sanctions.' And according to a whistleblower, he said the sanctions would be, 'Ripped up to allow money to start flowing' to one of Flynn's business projects. You had no interference with that, did you not?"

He agreed that he did not.

Watch the full questioning below: