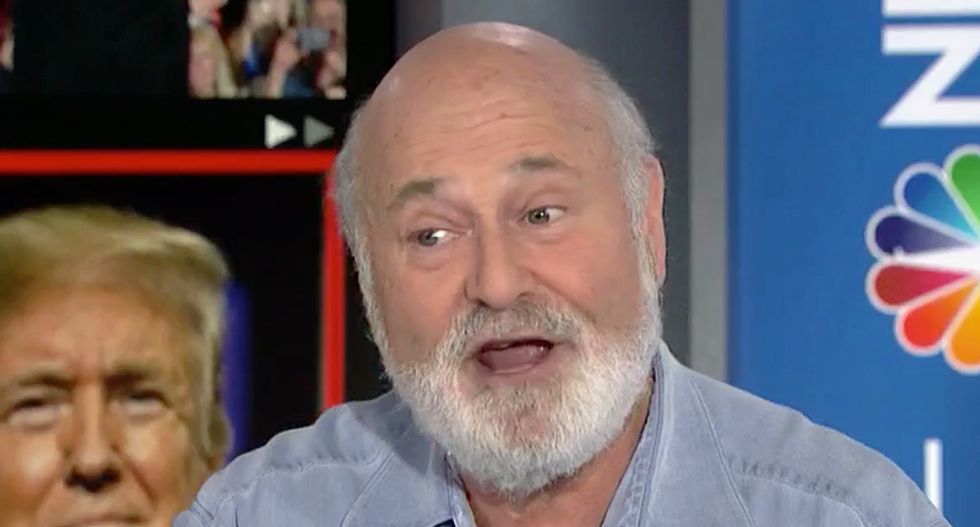 Rob Reiner, the director and producer of 'The Princess Bride,' on MSNBC. (Photo: Screen capture)

In a Monday interview, filmmaker Rob Reiner said that not even a fictional movie world could make up a story as absurd as the scandal President Donald Trump faces.

MSNBC's Ari Melber asked Reiner to explain why people admit to lies and get away with them in plots.

"Well, they get away with until somebody uncovers the lie, and that becomes a big focal point of the story," Reiner told Melber. "When all of a sudden the story flips because the lie is exposed. We are having an experience with a guy who lies all the time. Constantly lies, and is lying right to our face."

He explained that Americans have not yet reached the point where the lies become a "plot twist" that "flips and nails him."

"There's something that was told to me when we were doing the case against Proposition 8, which was to establish marriage equality," Reiner continued. "One of the lawyers says to me, 'You know, you can say whatever you want on television, but the minute you go into a courtroom and you put your hand on a Bible and swear to tell the truth, you have to tell the truth.'"

Reiner said that this is the reason Trump will never talk to special counsel Robert Mueller, the filmmaker said.

He went on to call it "the biggest political plot twist" in the history of the U.S.

"Because you have a guy lying, by the way, admitting to crimes all over the place," he noted. "Everybody in this administration is committing crimes and admitting to it. But at a certain point, they're going to be held accountable. The first step is for us to take back the House and start having the right kind of hearings that will get the truth out. Then ultimately, over time, people hopefully will come around to accepting the truth because if we don't, then we don't have democracy anymore."

The two moved to discuss Trump's bizarre practice of calling the press pretending to be a press secretary just to get information out. Reiner said that when he first heard the recordings and the practice, "I thought to myself, this guy is certifiably insane. Because think about this for a second. Who do you know that gets on the phone and pretends to be somebody else on this kind of level and talks to a journalist to get information out. That's insane. That's insanity... but that's as crazy -- that's kind of beyond pathological. There's some kind of mental illness that allows for something like that to happen."