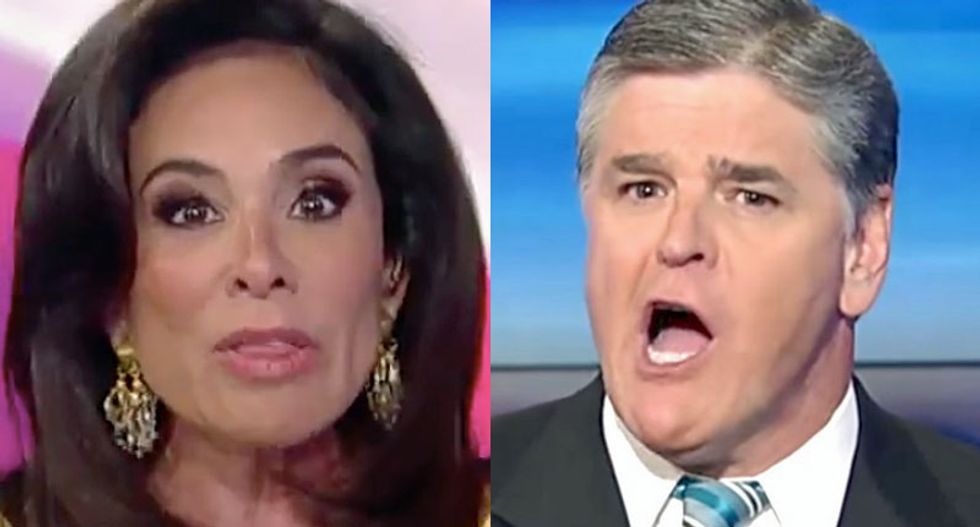 With President Donald Trump under assault by almost daily revelations either leaked by former associates or yet another aide coming under scrutiny by special counsel Robert Mueller, the Trump-supporting hosts of Fox News' opinion shows seem to have coalesced around one specific conspiracy theory.

According to an overview by the Washington Posts' J.M Reiger, the common theme emanating from pundits such as nightly hosts Sean Hannity, Laura Ingraham and weekend stalwarts Jeanine Pirro and Mark Levin is that Mueller is the frontman for a secret coup -- often referred to as the "deep state" -- to force Trump out of office.

As Levin recently told his weekend audience, "Robert Mueller is a greater threat to this republic and the Constitution than anything Vladimir Putin did during the campaign. And I am no fan of Vladimir Putin.”

The following night, as Pirro filled in for host Hannity, she asked, "Is Mueller a greater threat than Putin to this country?”

According to Reiger, the "Mueller is the ringleader of a coup d’état to overthrow Trump" theory has been pushed since 2017 by no fewer than nine Fox News personalities -- including now National Security Advisor John Bolton.

During this period, the hosts on Trump's favorite cable network have called Mueller's investigation -- that has netted over two dozen indictments and five guilty pleas -- a “witch hunt,” “illegitimate” and “corrupt.” According to Hannity, who has become a close confidant of Trump, Mueller's investigation into Trump is "a direct threat to this American republic.”

As Politico notes, Fox News' descent into "deep state" conspiracy mongering dates back to January of this year as Fox Business Network host Lou Dobbs declared, “It may be time to declare war outright against the deep state and clear out the rot in the upper levels of the FBI and the Justice Department."

Former GOP consultant Steve Schmidt nailed exactly what the Fox hosts were attempting to do, remarking, "The network is increasingly engaged in a misinformation campaign aimed directly at the American people for the purposes of sowing confusion and spinning a web of protective armor around the president, who is being investigated."

As Reiger notes, Hannity's view of Mueller has evolved as he has grown closer to Trump who he defends nightly.

In May of 2017, Hannity said of Mueller's appointment, "I think this is a good thing. I think, you know what, they’ve been clamoring for it, let them get it. … Let’s get to the bottom of it, game on.”