Jimmy Kimmel: Trump 'should put Don Jr. up for Russian adoption' for the epic flubs 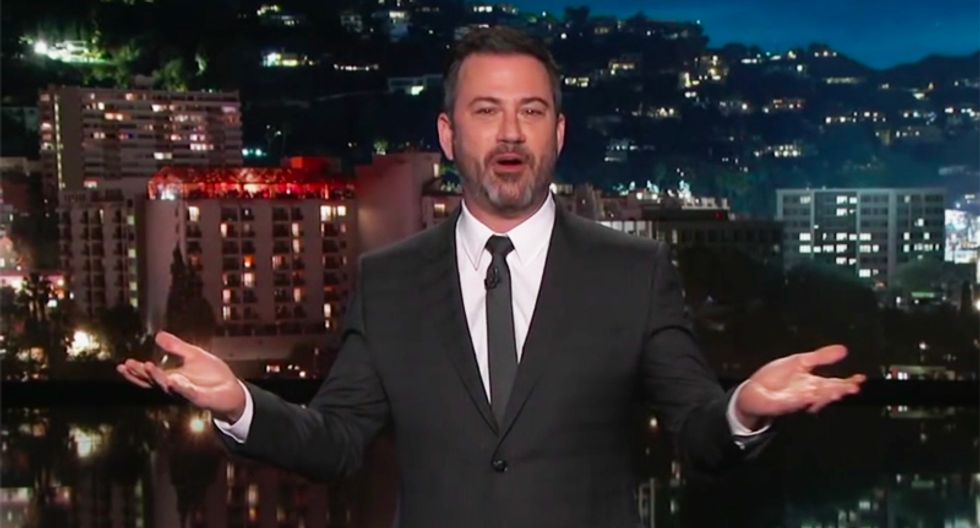 Kimmel began with the recent admission that Don Jr. did knowingly meet with the Russians trying to get information on Hillary Clinton. However, Trump argued collusion is totally legal.

"Fake News reporting, a complete fabrication, that I am concerned about the meeting my wonderful son, Donald, had in Trump Tower. This was a meeting to get information on an opponent, totally legal and done all the time in politics - and it went nowhere. I did not know about it!" he tweeted.

"It's nice that even on vacation, the president manages to find time to incremi-tweet his son," Kimmel said. "His wonderful son, I should say. He should put Donald Jr. up for Russian adoption."

Meanwhile, Trump has been told by aides and lawyers to stop tweeting because he's setting himself up for a disaster.

"Not since Robert Durst in 'The Jinx' has a defendant done such a good job convicting himself publicly," the host continued. "But Donald Trump does what the syphilis tells him to do. I'd like to see his lawyer's faces whenever he sends a tweet like this. I bet they carry a pillow around to scream into."

Kimmel went on to address the battle between Trump and LeBron James (as well as CNN host Don Lemon). He noted that everyone came to the NBA player's side from Michael Jordan to the first lady herself.

"LeBron opened a school for at-risk kids in Ohio last week, that guarantees college tuition for every child who graduates," Kimmel said. "Of course the last time Trump opened a school that the students sued him for fraud and won $25 million."

Watch a clip of Kimmel's opener below: