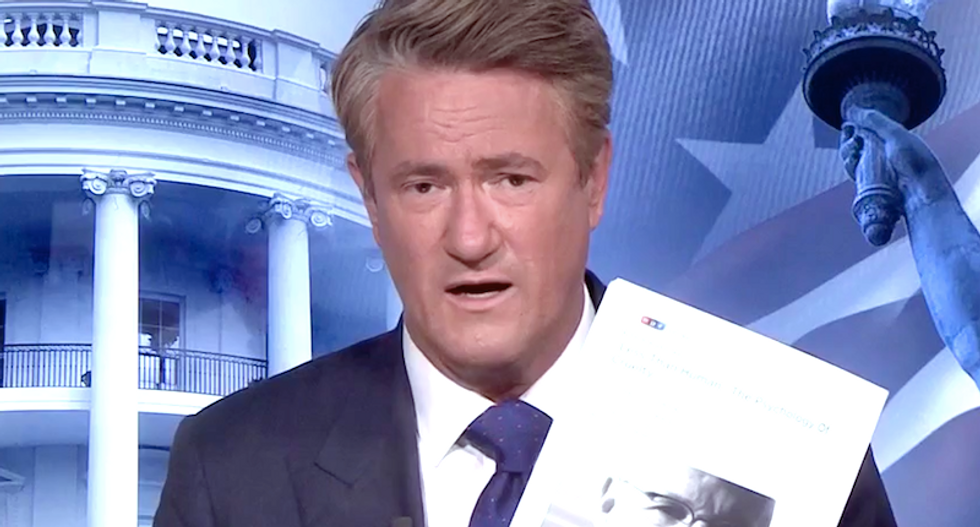 MSNBC's Joe Scarborough sounded the alarm over President Donald Trump's pattern of comparing black and Hispanic people to animals, as he did Tuesday morning when he slurred a former aide.

Trump attacked former "Apprentice" contestant Omarosa Manigault-Newman as "that dog" as she promotes a new tell-all book about her time serving in the White House, and Scarborough said the president's language had a dangerous precedent.

"It opens the door for cruelty and genocide," he continued. "Nobody is saying that Donald Trump is a Nazi, nobody is saying that he's Adolf Hitler in 1938, 1939, 1940, but you can see time and time again ... this is how dictators and tyrants open the door, and they do it by dehumanizing their political opponents."

Trump's dehumanizing language had been translated into cruel actions, such as his administration's family separation policy.

"Guess what led up to his, what I think many would think is savage, behavior on the border?" Scarborough said. "When he launched his campaign he talked about Mexicans being racists."

"Just this past year, what did he call Hispanics?" he added. "He called Hispanics breeders, like they were animals, like they were dogs, like they were mules. We've seen it time and time again. So he uses that language, and what does it move to? It moves to a policy where infants are ripped from their mother's breasts at the border, separated and possibly orphaned for life. There actually is precedent here."