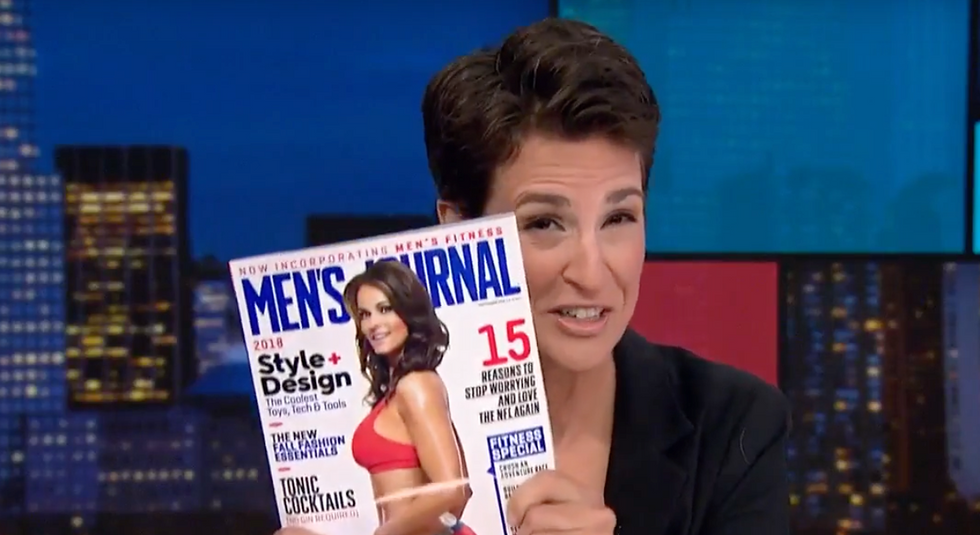 As MSNBC's Rachel Maddow noted Friday night, the average reader of Men's Journal typically can expect to see famous men with one of three haircuts when they purchase the magazine.

But their September issue, which the host acquired, offers up something a little different: A photo of Donald Trump's alleged former mistress Karen McDougal alongside the small-print promise that readers can learn her workout routine. 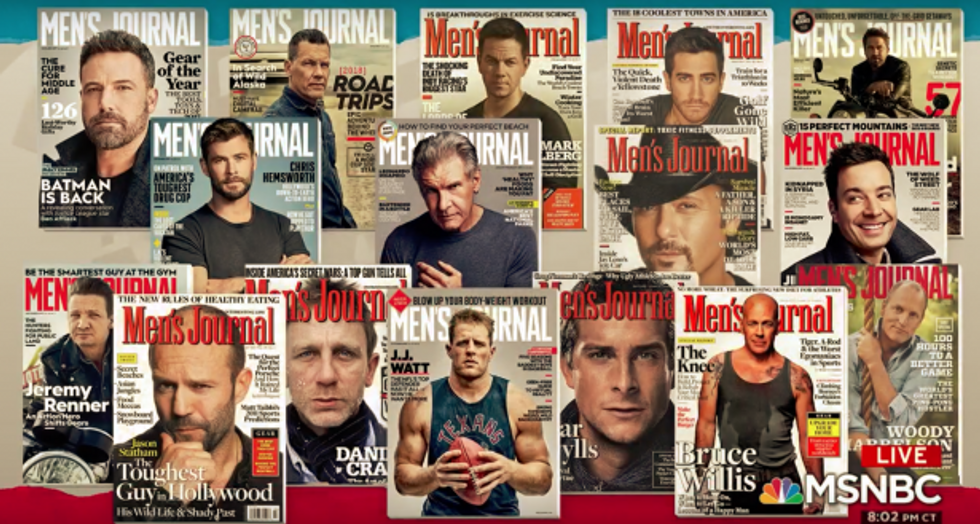 "This is kind of a departure for this magazine," Maddow joked before adding that, "we did have a warning that this was coming."

In late July, the Wall Street Journal published a report detailing the ways in which American Media Inc., the Trump-connected company that owns the National Enquirer as well as Men's Journal, is trying to spin an alleged "hush money" payout to McDougal into making it seem like it was a payment to appear on the cover of the men's magazine.

McDougal's Men's Journal cover was published "despite what appeared to be total bewilderment by the magazine's own staff," Maddow said. The WSJ's July report included descriptions of high-ranking executives at the company urging AMI CEO David Pecker—a man who considers Trump to be a "good friend"— to reconsider the move, which he reportedly ordered.

"Nevertheless, there she is," the host said.

The WSJ, Maddow continued, was also the first to report four days before the 2016 presidential election that in August, AMI had given McDougal a $150,000 contract "that included the exclusive rights to publish her story about having this alleged long-running extra-marital affair with Donald Trump."

"Having obtained those exclusive rights to publish that story, Ameican Media and David Pecker decided to not run the story," the host said, noting that it was "widely viewed as what is called a 'catch-and-kill' deal" to put McDougal's allegations of her long-running affair with Trump on ice.

The McDougal story heated back up after a recording of the president's longtime fixer Michael Cohen discussing paying back AMI with Trump.

"Federal prosecutors are looking into whether that was an effort to influence the outcome of the election, an effort that was potentially illegally coordinated with candidate Donald Trump and his campaign," Maddow said.

The existence of McDougal's AMI cover, the host said, is a "somewhat hilarious step" to make it seem like the $150,000 contract really was a legitimate publishing move — even though Men's Journal neither did any original photography for the story, nor did its reporters interview her.

Watch Maddow lay it all out below, via MSNBC: