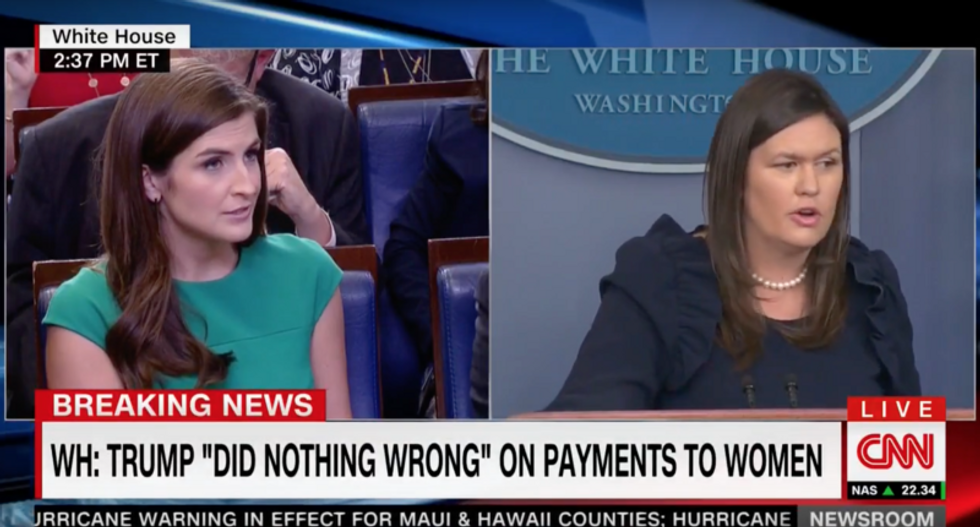 CNN's Kaitlan Collins elicited an angry response from Sarah Sanders, who was swamped with questions about Michael Cohen's admission of guilt in the Stormy Daniels/Karen McDougal hush-money investigation.

"In his interview today, the president said he found out about payments Michael Cohen made later on. But he is on tape discussing how to make one of the payments with Michael Cohen. So before the payment was made. How do you explain that?" asked Collins.

Sanders responded with what has become a familiar refrain from the White House: "the president did nothing wrong," and told Collins to talk to the president's lawyer, Rudy Giuliani.

But Collins was undeterred, saying "Rudy Giuliani is not a taxpayer funded spokesperson for the president. You are. So how can you not explain something the president said today on the grounds of the White House that seems to contradict audio that is the president saying that."

Sanders then insulted Collins for "asking the same questions over and over" and again refused to answer.

Collins persisted, asking "does the White House maintain that the president did not have affairs with Karen McDougal or Stephanie Clifford?" But by that time a visibly frustrated Sanders had had enough, brushed off the question, and turned to another reporter.