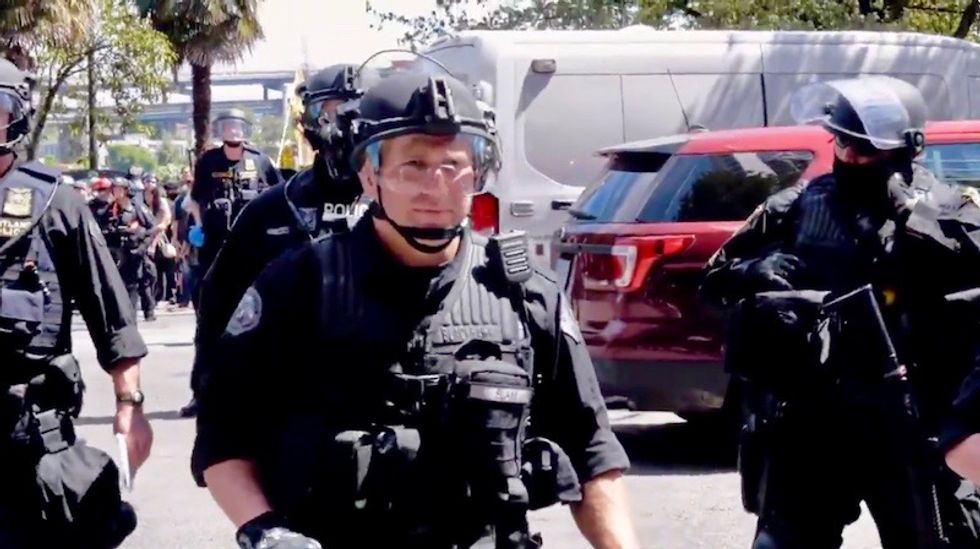 Portland police moments before attacking leftist protestors, apparently because they had forgotten their cars behind the protest line/Screenshot

Newly posted video appears to show the lead-up to a violent confrontation between police in Portland, Oregon and protestors which sent at least three people to the hospital, at least one with a gaping head wound.

The violence occurred at a march organized by far-right group Patriot Prayer, which drew a broad swath of right-wing extremists to the riverfront in the whitest major city in America. There, they were confronted by leftist counter-protesters, including Antifa.

Several leftist counter-protestors were injured during the protests, all apparently by the police who were assembled to protect the heavily outnumbered right-wing provocateurs.

In the immediate aftermath, Portland Police Chief Danielle Outlaw and Mayor Ted Wheeler had saluted their officers for "providing a safe environment for all individuals to exercise their First Amendments rights in a peaceful manner."

"Unfortunately, today, some people chose to commit illegal acts of violence, which required members of the Police Bureau to take action in order to keep all participants and non-participants safe," the police said. "This was a dangerous situation for all those involved, including officers, and I am disheartened that this kind of illegal behavior occurred in our beautiful city."

However, the video by Portland-based freelance photojournalist Daniel V. appears to show a very different situation.

It looked to me like the police attacked only to get to squad cars they left unattended. I saw nothing thrown befor… https://t.co/Qtj35kclGg
— Daniel V. Media (@Daniel V. Media) 1533602809.0

In the video, an officer appears to realize that the cops had left patrol cars unattended behind the lines of the counter-protest.

"Is that a police car out in that crowd?" one officers asks.

"Woody! Woody!" yells the first officer, walking off to talk to a third officer.

The cops stand, apparently looking at the cars, and chatting among themselves.

Moments later, one officer fires a flash-bang grenade at the counter-protestors and then the officers charge forward in a military-style formation to get to their forgotten cars, firing chemical weapons as they advance.

In the video, nothing appears to be thrown at the officers until after they fire on counter-protestors.

In Portland, some local media has lavished praise on the cops saying that "the heavy-handed police tactics" had avoided a situation where protestors "wreak havoc and even kill someone."

The local daily, the Oregonian, has stood apart for contradicting the official police account based on what its reporters witnessed.

The local chapter of the ACLU has thrashed the police actions, saying that they appeared to be politically motivated and totally excessive.

“The Portland Police Bureau’s response to protest is completely unacceptable in a free society. The repeated use of excessive force, and the targeting of demonstrators based on political beliefs are a danger to the First Amendment rights of all people. We call on the Portland Police Bureau, Mayor Wheeler, and Chief Outlaw to immediately end the use of weapons, munitions, and explosives against protesters,” said ACLU of Oregon director David Rogers.