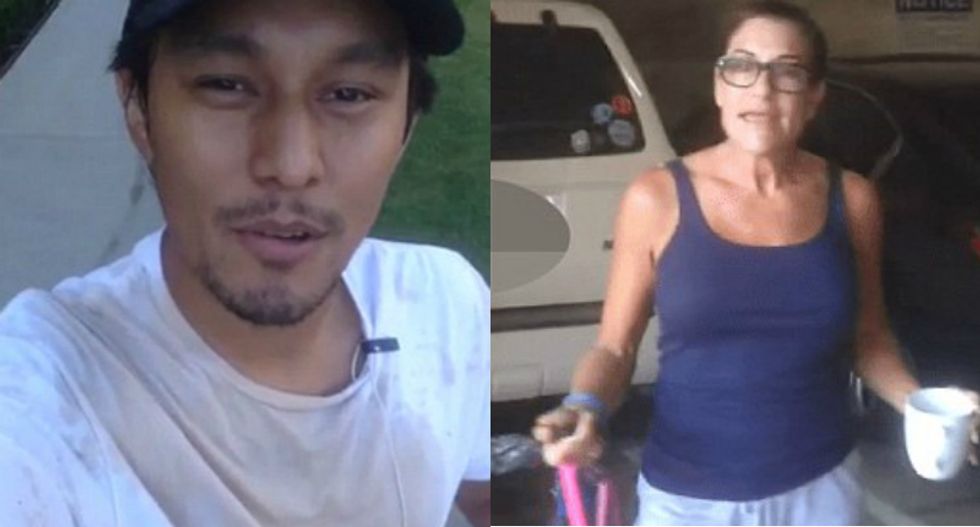 Miguel Sanchez with his shirt soaked by coffee (left) and Rhonda Polon moments before throwing coffee on the Latino man. Images via Facebook.

A Los Angeles woman is crying "not racist" after a viral video showed her throwing hot coffee on a Latino man and calling him a "w*tback."

Earlier in August, LA resident Miguel Sanchez posted a video of a woman named Rhonda Polon throwing hot coffee on him after she allegedly called him and another Latino construction worker "w*tbacks." Like many recorded racist instances before it, the video went viral, earning the woman the nickname "Hot Coffee Carol" on Twitter.

In a Tuesday interview with KTLA, Polon said she regrets her actions in the video — and insisted she's not a bigot.

“I’m not a racist,” the woman told the Los Angeles news station. “None of those things have ever come out of my mouth. I may have a temper at some points, but I am not a racist person.”

Sanchez told KTLA he called police after Polon threw the coffee on him but declined to have her arrested because although the coffee she threw on him was reportedly hot, he wasn't seriously injured. In addition, he said he was concerned that having her arrested would affect his relationship with the company contracting him to work at her apartment complex.

Since the video went viral, Polon said "she’s been the target of intense online harassment and threats," the report noted, adding that Latino groups and a resident of her apartment building have staged protests near her unit.

Polon, the report continued, still denies having made the remarks and insists it was a neighbor who called Sanchez and his coworker "w*tbacks."

"I’m completely sorry for throwing the coffee,” she told KTLA. “They were now coming at me from both sides and it scared the hell out of me.”

You can watch video of the incident below, via KTLA.