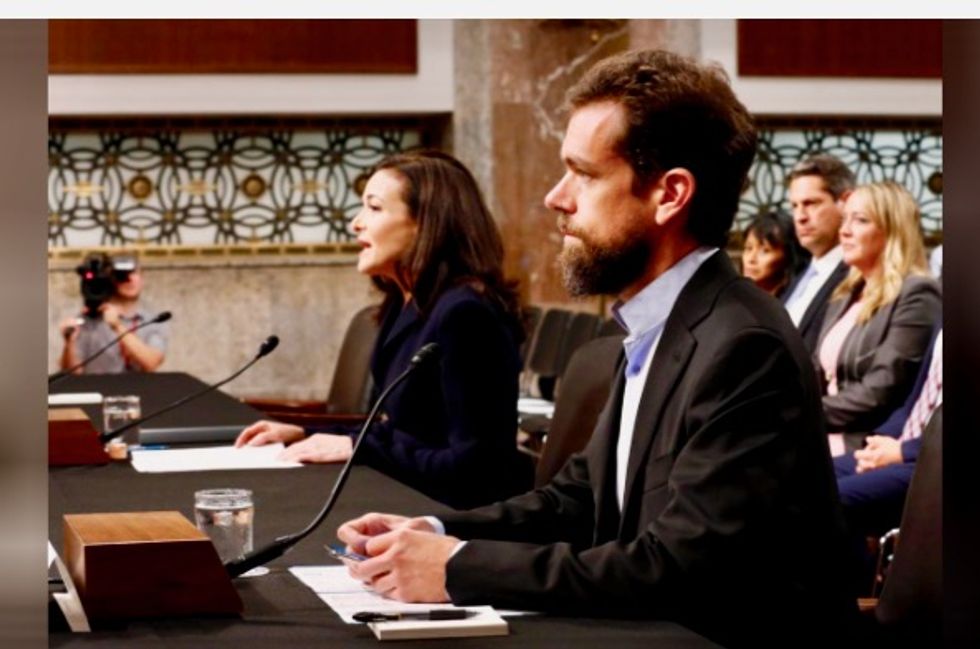 Executives from Facebook Inc  and Twitter Inc defended their companies to skeptical U.S. lawmakers on Wednesday over what many members of Congress see as a failure to combat continuing foreign efforts to influence U.S. politics.

At the start of the hearing Senator Mark Warner, the committee’s Democratic vice chairman, said the companies were not doing enough to stop the flow of foreign influence and threatened Congressional action.

Social media stocks fell after his remarks, with Twitter down 5.7 percent and Facebook around 1.8 percent lower. Shares of Alphabet Inc, the parent of Google, sank 2.7 percent.

Facebook Chief Operating Officer Sheryl Sandberg, who testified alongside Twitter Chief Executive Jack Dorsey, acknowledged that the company was too slow to respond to Russian efforts to interfere in the 2016 U.S. election, but insisted it is doing better.

“We’ve removed hundreds of pages and accounts involved in coordinated inauthentic behavior - meaning they misled others about who they were and what they were doing,” Sandberg told the Senate Intelligence Committee.

“When bad actors try to use our site, we will block them,” she said.

Dorsey, sporting a straggly beard, nose ring and open-collared shirt, insisted Twitter’s monitoring has tightened, including notifying law enforcement last month of accounts that appeared to be located in Iran.

Facebook, Twitter and other technology firms have been on the defensive for many months over political influence activity on their sites as well as concerns over user privacy.

“Unfortunately, what I described as a ‘national security vulnerability,’ and ‘unacceptable risk,’ back in November remains unaddressed,” Senator Richard Burr, the committee’s Republican chairman, said.

“Clearly, this problem is not going away. I’m not even sure it’s trending in the right direction,” he added.

Warner said social media companies were doing better at combating disinformation, but their efforts were insufficient.

“I’m skeptical that, ultimately, you’ll be able to truly address this challenge on your own. Congress is going to have to take action here,” Warner said.

Republican Senator Susan Collins said she had learned from a university report that she had been targeted some 270 times by Russian-linked tolls on Twitter, asking Dorsey why the company does not tell users when they have been attacked.

Dorsey said it was “unacceptable” that she was not told.

Before the hearing, President Donald Trump, without offering evidence, accused the companies themselves of interfering in the upcoming U.S. mid-term elections, telling the Daily Caller that social media firms are “super liberal.”

Trump told the conservative outlet in an interview conducted on Tuesday that “I think they already have” interfered in the Nov. 6 election. The report gave no other details.

Executives from the companies, which have repeatedly denied political bias, have traveled to Washington several times to testify in Congress, including 10 hours of questioning of Facebook Chief Executive Mark Zuckerberg over two days in April.

Senate Intelligence has been looking into Russian efforts to influence U.S. public opinion throughout Trump’s presidency, after U.S. intelligence agencies concluded that Kremlin-backed entities sought to boost his chances of winning the White House in 2016.

Moscow denies involvement, and Trump - backed by some of his fellow Republicans in Congress - has repeatedly dismissed investigations of the issue as a partisan witch hunt or hoax.

Some Republicans have also charged social media companies with bias against Trump and other conservatives.

Conspiracy theorist Alex Jones held a press conference outside the Senate hearing room as the testimony began to criticize the social media companies for banning him and his website Infowars from their platforms.

Twitter’s Dorsey was to follow his Senate testimony with an appearance at an afternoon hearing looking at that issue in the House of Representatives.

Dorsey will tell the House Energy and Commerce Committee that Twitter “does not use political ideology to make any decisions,” according to written testimony released on Tuesday.

Trump faulted Twitter on July 26, without citing any evidence, for limiting the visibility of prominent Republicans through a practice known as shadow banning.

Last week Trump accused Google’s search engine of promoting negative news articles and hiding “fair media” coverage of him, vowing to address the situation without providing evidence or giving details of action he might take.

Republicans control majorities in both the Senate and House, but the House’s approach to the election issue has been far more partisan than the Senate’s.

In the Senate, both Burr and Warner pressed the social media companies to do more.

Many senators expressed anger at Google, which was represented in the hearing room by an empty chair next to Sandberg. Republican Senator Marco Rubio said the company might have skipped the hearing because it was “arrogant.”

Google did release written “testimony” from Walker ahead of the hearing, even though he was not expected to appear. Walker said in his statement that the company was taking the issue of foreign interference in politics very seriously.

A committee spokesperson said Walker’s “commentary” was not testimony, adding, “We wish his enthusiasm for participating in the company’s public hearing extended to his company’s senior leadership, and that they were willing to answer the committee’s questions.”