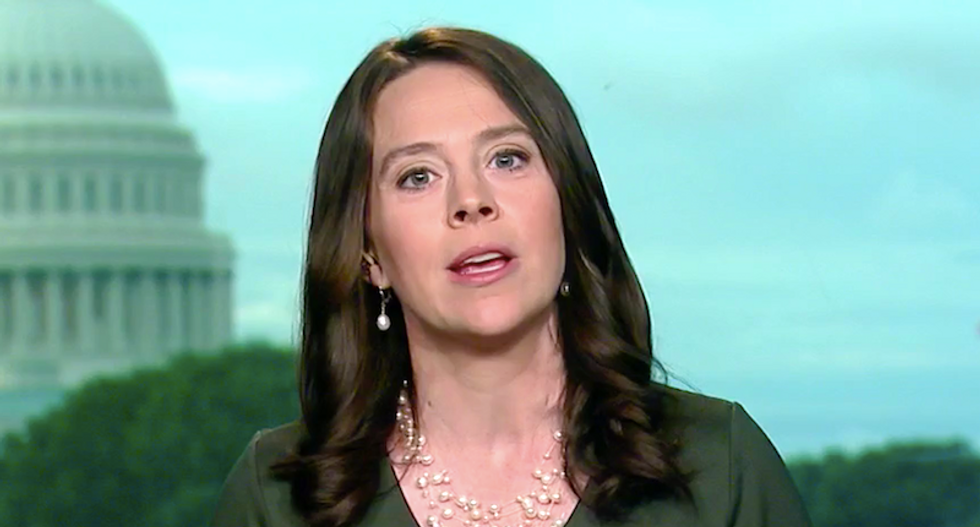 A conservative activist who played a key role in Brett Kavanaugh's nomination agrees sexual assault allegations against him should be investigated -- but she insisted that time had passed and he should be confirmed anyway.

"The experience Dr. Ford described is awful, but anyone who is outraged should be outraged particularly of the behavior of the Senate Democrat that came through several times," Severino said.

The conservative legal activist blamed Democrats for putting Ford through the hearing, but she said the California professor could not prove that Kavanaugh was her assailant.

"At the end of the day we still don't have any corroboration of her events, the witnesses she put there don't remember this party," Severino said. "Her lifelong friend says, 'I don't think I even know Brett Kavanaugh.'"

Severino suggested Ford was simply mistaken about which teenage boy tried to rape her, and she agreed an FBI investigation would have been "helpful" -- but she said the Senate should go ahead and vote despite the questions about Kavanaugh's past behavior.

"I think it would have been helpful, I suppose, to interview these witnesses beforehand by the FBI when Sen. Dianne Feinstein (D-CA) received this," Severino said. "That would have been the correct result."

Joyce White Vance, the former U.S. Attorney for the Northern District of Alabama, asked why she would not support such an investigation now, before the Senate votes.

"This is not a one- or two-day deadline, we've had this for two weeks," Severino insisted. "The Senate Judiciary Committee have been doing the same type of interviews that the FBI would do. Senate Democrats have had the opportunity to participate, in some cases they've been on the same calls and refused to ask questions out of spite, I suppose, because they keep saying only the FBI can ask questions. No, senators, this is your job."

Vance asked why senators had not been able to question Mark Judge, a former Kavanaugh friend who Ford placed in the room where the alleged assault took place.

"They have, they spoke to him twice," Severino said. "They received two different statements."

The former U.S. Attorney asked why senators had not interviewed or questioned Judge, who went into hiding at a Delaware beach house after Ford came forward -- and Severino blamed Democrats.

"The Senate Democrats were welcomed to do this, (but) they have boycotted the investigation process, even while claiming in the media they want an investigation," Severino said. "That is very disingenuous."

Vance asked whether the Democratic minority could issue a subpoena for Judge, who has refused to testify before the committee -- and Severino refused to say.

"I'm not sure how the subpoenas work," Severino said. "I know they interviewed Judge Kavanaugh several times. If the Democrats had wanted to, I believe they could have asked to interview Judge, as well, but they have simply said we don't want to participate in this process -- only the FBI can do it."

Daniel Goldman, former assistant U.S. Attorney for the Southern District of New York, knocked down several of Severino's claims after her appearance ended.

"I think there are a couple of problems," he said. "The Senate Committee staffers are not trained professional investigators. Two, the letter from Mark Judge is pretty meaningless, because what you would really need to do to properly interview him is get into a lot of the details of what was going on."

He pointed to a July 1, 1982, party referenced in Kavanaugh's contemporaneous calendars, which he wrote was attended by the same individuals identified by Ford as present on the date of her assault.

"You can easily figure out what house that was at, then could you figure out whether the description matches what Professor Ford talks about," Goldman said. "There are many ways to find corroboration or not corroboration, if you want."

"So we're left with a situation where because of the delays with Democrats and how they may have handled this, Carrie and others seem to be saying it doesn't matter any more," he added.