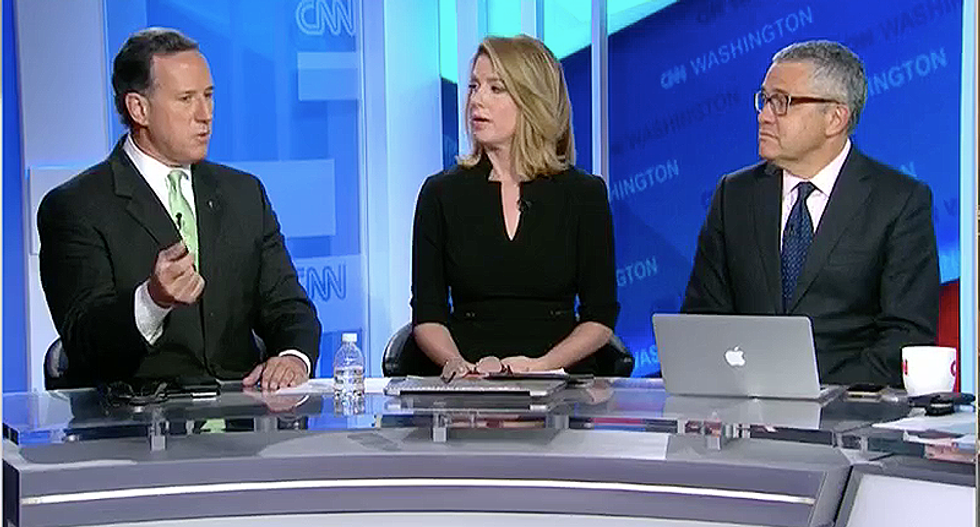 Former Sen. Rick Santorum (R-PA) tried to claim that the accusations about Supreme Court nominee Brett Kavanaugh are part of a Democratic conspiracy to prevent the appointment. But Democratic strategist Kirsten Powers was quick to explain just how wrong that assessment is.

Santorum used two excuses why Dr. Christine Blasey Ford was probably "mistaken" about the attempted sexual assault. He went on to claim that hundreds of prisoners are misidentified and were released after DNA evidence proved that they didn't commit the crime because people "don't remember things correctly."

"I think there is a very good chance she's not lying," Powers began.

"I think she believes it is him, but sometimes as we all know our memories are wrong. We misremember them," Santorum said, diminishing the claims.

"I've never been sexually assaulted, but I think I would remember," noted legal analyst Jeffrey Toobin.

Powers explained to Santorum that people are wrongfully convicted of crimes because of overzealous prosecutors, not as a result of inaccurate witness memories.

"The idea that a woman wouldn't remember who raped her is fairly far-fetched," Powers told Santorum.

Santorum then claimed two men came forward to say they did it, but the claim has been discredited, despite it continuing to be a right-wing talking point.

"I think the thing to remember about what we're about to watch is that it's not a real investigation," Powers continued. "It's a show hearing. It's basically two people coming in, giving their stories. There are a lot of other people who could come in, who could be corroborating witnesses who may actually back up what Judge Kavanaugh has to say. Mark Judge, we don't know what he would say, but the point is he is not going to be there."

Under normal circumstances when searching for the truth, all witnesses are brought in. Today, they are not. Powers noted that Debbie Ramirez is another accuser who is willing to testify. According to her lawyers, the Judiciary Committee has refused to return her calls.

"This isn't a real attempt at getting at the truth," Powers continued. "It's an attempt to put these people next to each other, let people draw their conclusions and have a vote."

Santorum then turned to claim conspiracy, but Powers shot that down as well. Dr. Ford spoke to her therapist and husband about the incident in 2012. Powers explained that the Democrats on the committee would have had to predict Donald Trump would be elected as president in 2016 and would appoint Kavanaugh in 2018. Claiming a conspiracy was plotted six years ago predicting these things is absurd, the panel concluded.