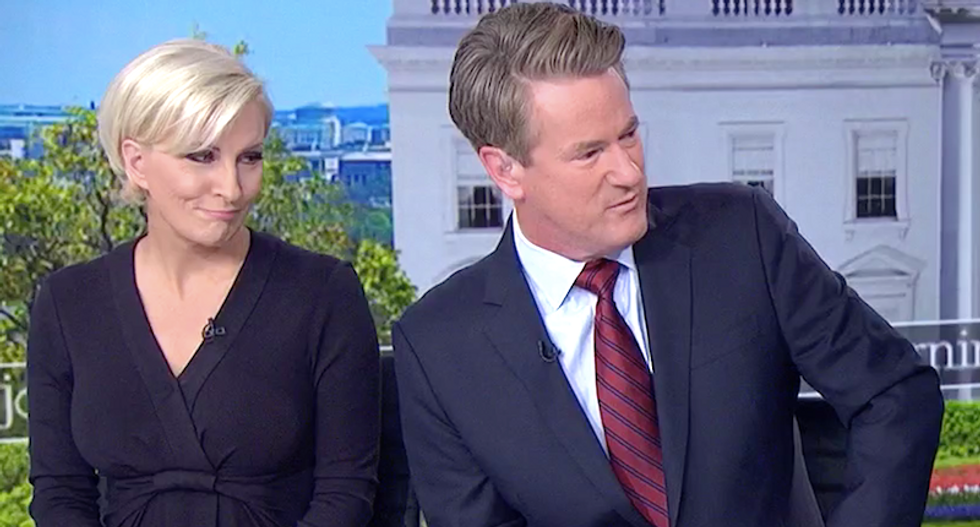 Half of Americans trust Mueller, according to a CNN poll, while only 30 percent trust the president -- and both of those numbers are moving in the wrong direction for Trump.

"Rudy Giuliani has been trashing him," Scarborough said. "There have been a lot of people in the media saying maybe what Rudy has been doing is working. Maybe Americans are such fools that they will believe Rudy lying every day, changing his story."

But the "Morning Joe" host said the poll shows Americans aren't buying what Giuliani is selling.

"Robert Mueller today has a percentage of approval from the American people than he ever has, 20 points higher than Donald Trump," Scarborough said. "He keeps going up, Trump keeps going down. You would think somebody at the special counsel's office, maybe they should send Rudy some flowers and thank him because he's been doing nothing but help Robert Mueller."

Giuliani's strategy is aimed at solidifying support from Trump's base, Scarborough said.

"This strategy of Rudy Giuliani's is a Steve Bannon strategy -- it's a 33 percent strategy," he said.

He faulted Republican lawmakers for helping Trump push back against the Russian investigation, which he said helped Vladimir Putin undermine American democracy.

"You have these dupes in the House of Representatives who -- they're not just being dupes for Donald Trump -- but now since they're trying to obstruct a Russian investigation and interfering with democracy, they're now -- they're being dupes for Vladimir Putin," Scarborough said. "Does that play in the Deep South? Because I'm from the Deep South and that ain't ever played in Dixie. That's never played where I come from."

Polls show more than seven in 10 Americans believe Trump should testify under oath in the special counsel probe, while 47 percent say the president should be impeached and removed from office -- up 5 points since June -- while 48 percent say he should remain in the White House.

"I've been following politics for a very long time," Scarborough said. "I've just never seen a number like that, where half of America -- and it's moved up 5 percent since June-- half of America wants Donald Trump impeached and removed from office."

But he said Republican lawmakers would never go along with that.