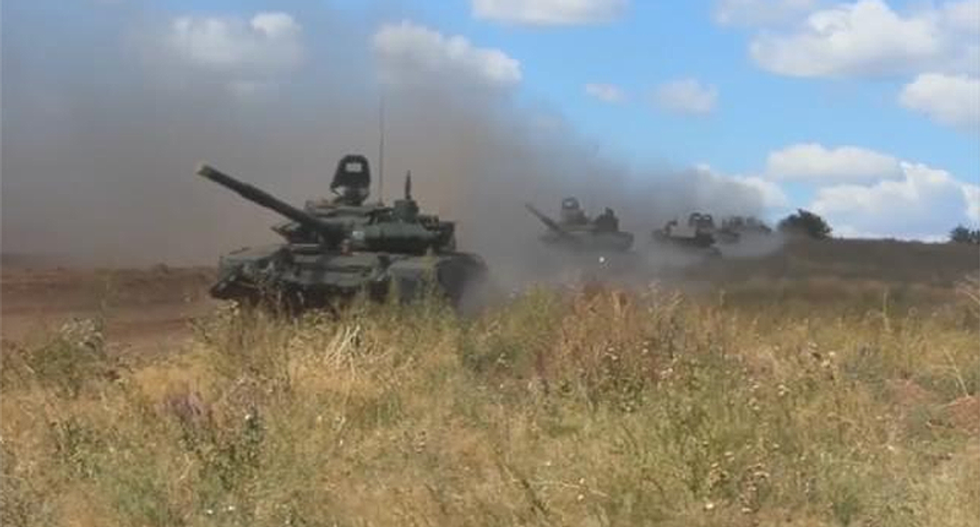 Russia began its biggest war games since the fall of the Soviet Union on Tuesday close to its border with China, mobilising 300,000 troops in a show of force that will include joint exercises with the Chinese army.

China and Russia have staged joint drills before but not on such a large scale, and the Vostok-2018 (East-2018) exercise signals closer military ties as well as sending an unspoken reminder to Beijing that Moscow is able and ready to defend its sparsely populated far east.

Vostok-2018 is taking place at a time of heightened tension between the West and Russia, and NATO has said it will monitor the exercise closely, as will the United States which has a strong military presence in the Asia-Pacific region.

Russia’s Ministry of Defence broadcast images on Tuesday of columns of tanks, armoured vehicles and warships on the move, and combat helicopters and fighter aircraft taking off.

In one clip, marines from Russia’s Northern Fleet and a motorised Arctic brigade were shown disembarking from a large landing ship on a barren shore opposite Alaska.

This activity was part of the first stage of the exercise, which runs until Sept. 17, the ministry said in a statement. It involved deploying additional forces to Russia’s far east and a naval build-up involving its Northern and Pacific fleets.

The main aim was to check the military’s readiness to move troops large distances, to test how closely infantry and naval forces cooperated, and to perfect command and control procedures. Later stages will involve rehearsals of both defensive and offensive scenarios.

Russia also staged a major naval exercise in the eastern Mediterranean this month and its jets resumed bombing the Syrian region of Idlib, the last major enclave of rebels fighting its ally President Bashar al-Assad.

The location of the main training range for Vostok-2018 5,000 km (3,000 miles) east of Moscow means it is likely to be watched closely by Japan, North and South Korea as well as by China and Mongolia, both of whose armies will take part in the manoeuvres later this week.

Analysts say Moscow had to invite the Chinese and Mongolian militaries given the proximity of the war games to their borders and because the scale meant the neighbouring countries would probably have seen them as a threat had they been excluded.

The exercise - which will involve more than 1,000 military aircraft, two Russian naval fleets, up to 36,000 tanks and armoured vehicles and all Russian airborne units - began as President Vladimir Putin held talks with Chinese President Xi Jinping in the Russian port city of Vladivostok. [nR4N1VS01S]

Relations between Moscow and Beijing have long been marked by mutual wariness with Russian nationalists warning of encroaching Chinese influence in the country’s mineral-rich far east.

But Russia pivoted east towards China after the West sanctioned Moscow over its annexation of Ukraine’s Crimea region in 2014 and trade links between the two, who share a land border over 4,200 km long, have blossomed since.

Russia broadcast footage of some of 24 helicopters and six jets belonging to the Chinese air force landing at Russian air bases for the exercise. Beijing has said 3,200 members of the People’s Liberation Army (PLA) will join in.

Some experts see the war games as a message to Washington, with which both Moscow and Beijing have strained ties.

“With its Vostok 2018 exercise Russia sends a message that it regards the U.S. as a potential enemy and China as a potential ally,” wrote Dmitri Trenin, a former Russian army colonel and director of the Carnegie Moscow Center think tank.

“China, by sending a PLA element to train with the Russians, is signaling that U.S. pressure is pushing it towards much closer military cooperation with Moscow.”

When asked if he was concerned about a potential military alliance between Russia and China in the future, U.S. Defence Secretary Jim Mattis said he did not see the two countries aligned in the long-term.

“I think that nations act out of their interest. I see little in the long-term that aligns Russia and China,” Mattis told reporters in Washington.

Putin, who is armed forces commander-in-chief, is expected to observe the exercises this week alongside Defence Minister Sergei Shoigu, who is overseeing them.

Shoigu has said they are the biggest since a Soviet military exercise, Zapad-81 (West-81) in 1981.