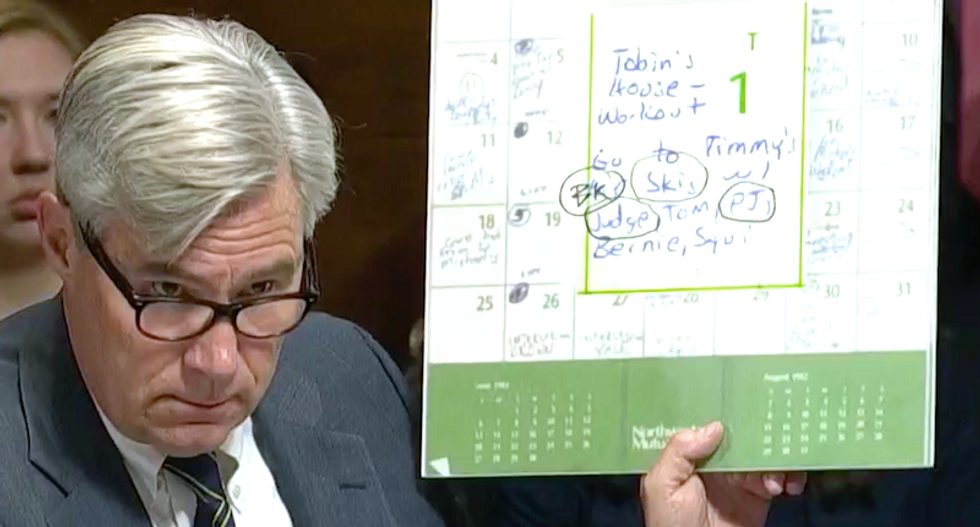 Sen. Sheldon Whitehouse (D-RI) delivered a powerful rebuke of his Republican colleagues for refusing to allow a law enforcement investigation of sexual assault allegations against Brett Kavanaugh -- and he identified the possible date of the attack.

The Rhode Island Democrat said accuser Christine Blasey Ford provided credible testimony about her recollections of the assault, and he said the Supreme Court nominee's testimony was unreliable.

"Kavanaugh dodged and dissembled, ranted and raved, filibustered -- I did not find him credible," Whitehouse said. "I don't believe 'boof' is flatulence, I don't believe the devil's triangle is a drinking game, and I don't believe calling yourself a girl's alumnus is being her friend, and I think drinking until you 'ralph' or fall out of the bus or don't remember the game or need to piece together your memory the next day is more consistent with Dr. Ford's and others' testimony than his own."

"If Dr. Ford's testimony is true, I hope we can all agree Kavanaugh has no business on the court, and I for one believed her," he added.

He blasted the Republican majority for refusing to subpoena Mark Judge, a Kavanaugh friend who Ford placed in the room at the time.

Whitehouse pointed to a calendar Kavanaugh kept as a teenager, which lists a party on July 1, 1982, that matches up with Ford's testimony about who was present the night she was assaulted.

"We know 'Bart' Kavanaugh was there because it's his schedule, and here's Judge, and here's PJ, here are all those three named boys and others at a house together just as she said," Whitehouse said. "She said Kavanaugh and Judge were drunk and that she had a beer. (The calendar shows) skis -- (or) brewskis, beer. They were drinking, just as she said."

"Now, I will concede that the two girls aren't mentioned, but spot me this," he added. "If you had just sexually assaulted one of the two girls, would you add the girls' names to your calendar? I doubt it. This may, may be powerful corroborating evidence that the assault happened, that it happened that day, and that it happened in that place, but with no FBI investigation, we can't tell."

Whitehouse vowed to continue investigating Kavanaugh's past -- regardless of whether he's ultimately confirmed.

"We have done a botch of the investigation, over time I expect the facts to come out," he said. "They have a way of doing that. Coverups never last. The sand is running through Kavanaugh's hourglass, and I pledge whatever I can do to make sure that the truth of his conduct is ultimately determined."