Watch Lindsey Graham's meltdown in front of reporters over Ford testimony: 'God help us as Republicans' 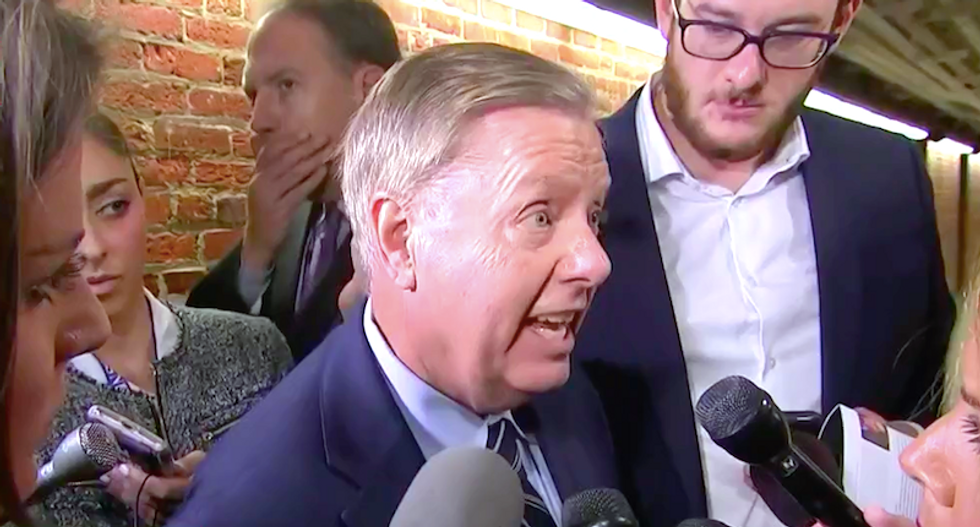 The South Carolina Republican spoke to reporters in the U.S. Capitol during a break in the Ford hearing, and Graham said he hadn't heard anything to change his mind on President Donald Trump's Supreme Court nominee.

"She took a polygraph and they didn't tell us until Sept. 26," Graham said. "All I can deal with is what's in front of me. I've got a guy who adamantly denies this. Anyone who knows him in a real way say this is not the guy I know. I've got Dr. Ford, who can't tell me the time and the place, and we'll see what happens."

He accused Democrats of pulling a political stunt with Ford and other women who have alleged sexual assault by Kavanaugh, and he warned Republicans they would do it again.

"Let me put it this way to my Republican colleagues," Graham said. "If this becomes the new standard, where you have an accusation for weeks, you drop it right before the hearing, you withhold from the committee a chance to do this in a professional, timely fashion. When they publicly say that their goal is to delay the vote, get the Senate back in 2018, to make sure he can't fill the seat, they're publicly saying that, I don't want to reward that kind of behavior. I think we've been very fair."

"To my Republican colleagues," he added, "if you can ignore everything in this record, looking at allegation that's 35 years old, that's uncertain for time, place, date and no corroboration, if that's enough for you, god help us as Republicans. Because this happens to us, it never happens to them."

Then he threatened Democrats and their future nominees.

"Let me tell you, my Democratic friends," Graham said. "If this is the new norm, you better watch out for your nominees."