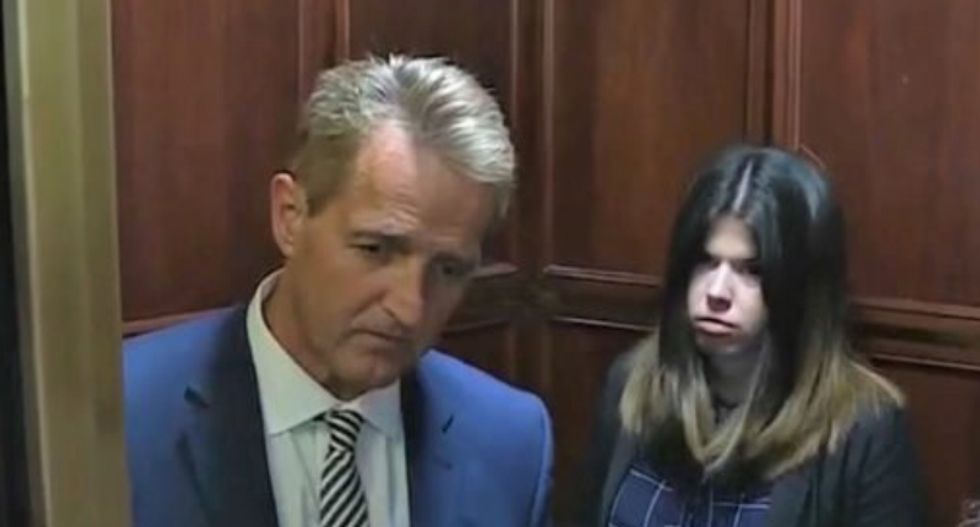 Sen. Jeff Flake (R-AZ) being confronted by an angry woman in an elevator about Brett Kavanaugh. Image via screengrab.

After reporting all day on Sen. Jeff Flake's (R-AZ) surprising call for an FBI investigation into the sexual assault allegations against Brett Kavanaugh, MSNBC's Kasie Hunt explained the timeline of that decision.

Hunt noted that Flake's decision appeared to be a done deal when he announced that he was a "yes" to confirm Kavanaugh earlier in the day -- but en route to the Senate Judiciary Committee hearing, "something changed."

In a widely-televised emotional moment, a young woman confronted the Arizona Republican in a Senate elevator. She berated him for supporting the nominee amid the allegations, told him that that signaled to young women that their assaults didn't matter, revealed her own rape and demanded that the senator look her in the eye.

When he got to the committee room following the elevator confrontation, reporters informed Flake's friend and colleague Sen. Chris Coons (D-DE) of the Republican's decision.

"Coons became visibly emotional," Hunt explained. "He's not a guy who typically swears, he used swear words in a tone that was more sad than angry."

Flake then left the room with Coons and Sen. Amy Klobuchar (D-MN) and after they returned, the Republican made his surprising call for the Kavanaugh floor vote to be delayed until the FBI investigates the allegations.

"This was about a personal relationship between two people who have served together in the Senate," the reporter said. "It was with the cameras off and it was because they trusted each other that Jeff Flake could trust what Sen. Coons was saying."

"That kind of an interaction, that kind of trust, that has been missing from the Senate and from the Congress more broadly," Hunt added, "and that is what is breaking it."

Watch her explanation below via MSNBC: