George Will excuses Kavanaugh's angry lies under oath: 'Put yourself in his shoes -- he's exhausted' 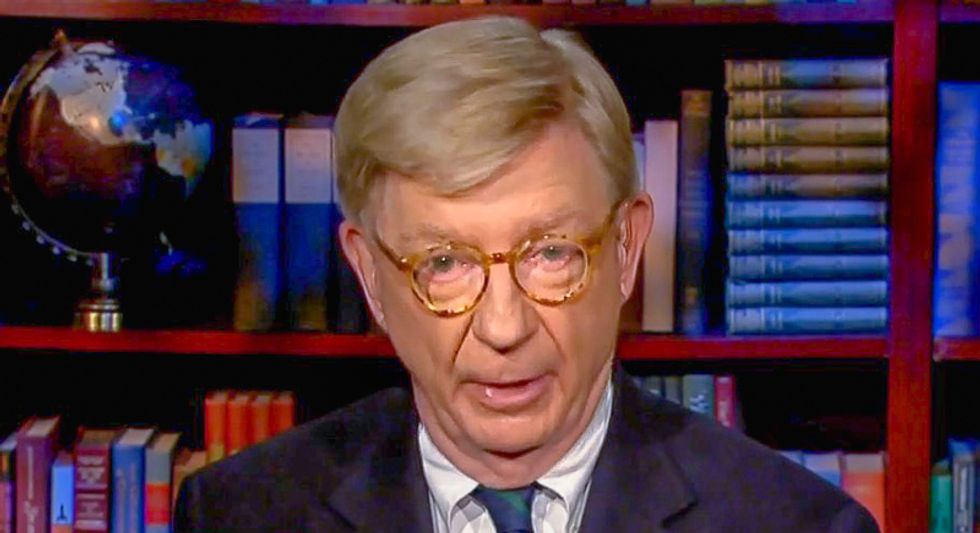 MSNBC contributor George Will on Monday argued that Supreme Court nominee Brett Kavanaugh should be confirmed to the high court even if he lied under oath to the Senate Judiciary Committee.

On Monday, MSNBC host Andrea Mitchell noted that Kavanaugh had come under fire for apparent falsehoods he told in last week's opening statement to the committee.

"In the opening statement, which was widely praised by Republicans for the passion... he also got into it's a left-wing conspiracy, this is payback from the Clintons," Mitchell said. "He got into partisan politics, not just, 'I am being victimized here, I'm being unfairly accused.'"

"Put yourself in his shoes," Will replied. "He's exhausted after weeks of this. He's under tremendous bombardment. He loses his temper and people say, 'Ah-ha!' -- the very people who have been bombarding him with these accusations... they say he lacks the judicial temperament."

"It seems to me this is the danger in having an investigation," the conservative columnist opined.

Mitchell pushed back against Will's claim that Kavanaugh "lost his temper" while testifying.

"He would have been well advised in his state of exhaustion and despair," Will remarked, "to have stuck with the script that others had helped him prepare. That said, we are really not going to let this nomination turn on infelicitous language under duress. I hope."

Former assistant Watergate special prosecutor Jill Wine-Banks argued that the committee should focus on false statement made by Kavanaugh under oath.

"Because if he lied about anything, whether it's the definition of 'boofing' or 'devil's triangle' or how much he drank, that is something that is a serious impediment to his ever serving on the Supreme Court," Wine-Banks said. "And it's the best argument that you can ever make to a jury... you heard him lie about one thing, how can you trust any of his other testimony?"

Mitchell asked Will if lying to the committee should be "disqualifying" for Kavanaugh.

"If he looked the Senate in the eye and said, what does a devil's triangle mean and said, it's a drinking game and that's clearly known to be not true -- and about two minutes on Google will tell you otherwise -- then it's the thin end of an enormous wedge," Will observed. "Because then, the presumption shifts that if you lie about 'A' that's small, might you lie about 'B', 'C' and 'D' that are large?"

"Again, things begin to metastasize," Will said. "Whether or not that's sufficient to disqualify, I don't know. But it's a huge problem."