MSNBC panel dreads Trump’s next move in ‘terror’ campaign against Dems: ‘The thing we all feared is now at our doorstep’ 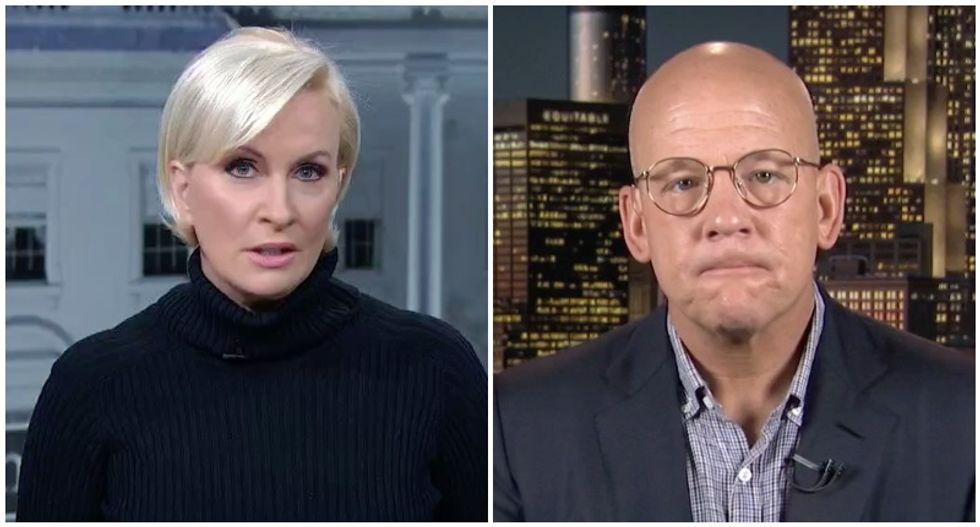 Panelists on MSNBC's "Morning Joe" agreed a string of bombs mailed to prominent Democrats and media organizations were an act of terrorism, and the feared President Donald Trump's leadership in a domestic political crisis.

Trump made "perfunctory" remarks calling for unity, according to political analyst John Heilemann, but the panelists couldn't help but notice that in the same speech the president urged Democrats not to vote in the upcoming midterm elections.

"Make no mistake, this was a terrorist attack on America in great scope," said presidential historian John Meacham. "Whether it was a foreign national or domestic, this was an act of terrorism, an attempt to assassinate a number of former duly elected leaders. We have to figure out in moments like this, our greatest leaders have led with a steadying hand and not an incendiary one."

Heilemann couldn't predict what affect the bomb plot would have on next month's elections, but he said Trump's provocations had been pointing the country in this direction since he launched his campaign.

"I think it's obvious, given the nature of it," Heilemann said, "and given the fact that for two years now, myself, you, others on this program and other programs have been predicting with horror and with dread, I should say, that given the kind of toxic environment in which we're in and given the fact that the president has seemed for two years not interested in trying to detoxify the environment but rather pour gasoline on the fire at every opportunity, we've all, with dread, predicted that something like this would happen -- and now it has happened."

None of the bombs have detonated or caused any injuries, but Heilemann said that did not matter.

"It did not succeed on its terms, but the thing we all feared, something like that that we predicted, is at our doorstep," Heilemann said. "(Trump) did not pour gasoline further on the fire yesterday, but if you watched him in his prepared remarks at the White House and his rally in Wisconsin, you did not sense, I think, someone who grasped the gravity of it and certainly not someone who was taking extraordinary measures to try to calm the waters."