'Which perjury is enough perjury?': MSNBC analyst gets Jeff Flake to make a big commitment at New Hampshire event 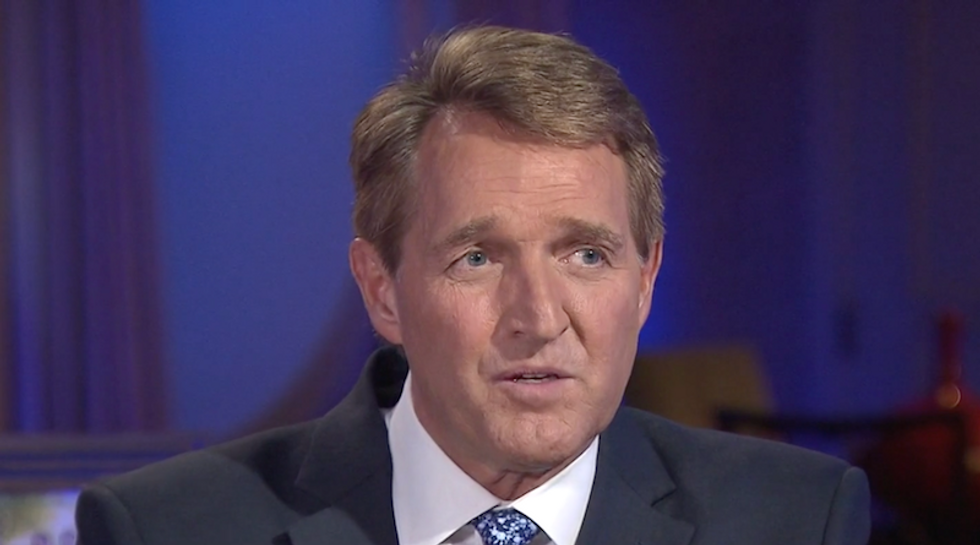 Sen. Jeff Flake (R-AZ) was questioned Monday about his declaration that lying under oath would disqualify Supreme Court nominee Brett Kavanaugh from consideration. After documenting 30 lies, NBC analyst John Heilemann approached the senator to ask what he thinks about the lies.

Heilmann was the one who told Flake that the White House had expanded the scope of the FBI investigation into Kavanaugh, but the FBI hasn't received any document saying that.

"If that's true, that's a problem," Flake said according to Heilmann.

"It's clear he's not on the same page with leadership," Heilmann assessed. "I asked him that: 'Are you on the same page with Mitch McConnell (R-KY) and Chuck Grassley (R-IA).' And he said, 'I'm not sure.' And I said, 'When you get to the end of the week, and the scope of this inquiry and the way it's conducted do not meet your standards, what are you prepared to do? Are you prepared to ask for more time, are you prepared to use that as a basis just to vote against Judge Kavanaugh?' And he said, 'Let's wait until we get to then.'"

Flake also said he didn't want to say he was open to an extension because he thinks the FBI will get the work done. But he's not opposed to asking for more time.

"He didn't deny that," Heilmann said.

Host Lawrence O'Donnell brought up the "60 Minutes" segment that closed the interview with Flake and Sen. Chris Coons (D-DE). Both indicated that if Kavanaugh were found to have lied under oath, it would be a disqualifier.

"And whether or not if he's lied but lied to important enough things to cause [Flake] to vote no," Heilmann continued.

He noted that he had just emerged from meetings and events and wasn't updated on Kavanaugh.

"It's demonstratively the case he's lied to some of these matters to the committee on matters large and small," Heilmann said. "'Which of these matters is enough to be -- what perjury is enough perjury, essentially, to cause you to vote against him?' And he said, 'I'm going to have to wait and see what is shown out.'"

Heilmann noted that Flake indicated perjury should be part of the investigation, "not merely the accusations of sexual misconduct but also perjury that may have arisen out of trying to explain away those allegations."

"Look, we got to the drink -- maybe these things related to 'word definitions' would not be enough to keep Judge Kavanaugh off the court," Heilman paraphrased Flake. "But when we turn to the questions of drinking, he tried to make a bit of a joke about being a Mormon and hard to judge for himself on matters of excessive drinking. But when I laid out all the claims that have been pouring in today about this, he looked clearly troubled by it. It seemed obvious to me, though he didn't say it because he is Jeff Flake: if it were demonstratively true that Judge Kavanaugh had mischaracterized the drinking he was engaged in in high school and college, and he lied to it to the committee, that would be a big problem with Jeff Flake."