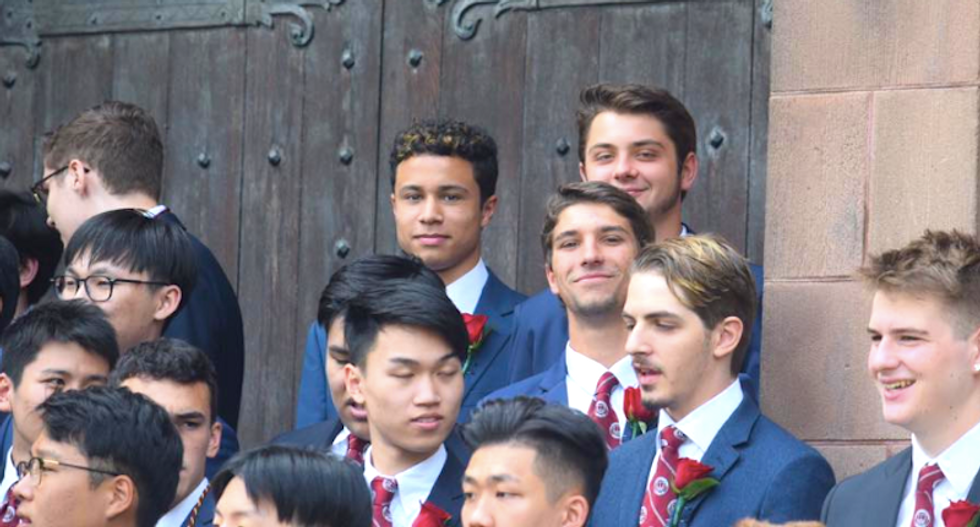 A Massachusetts teenager said he's been targeted for racist abuse from classmates since learning of his African ancestry, and his family said school officials have done nothing to stop it.

Laura and Mark Huard Jr. have set up a protest outside Tantasqua Regional High School calling for the resignations of top administrators after the racial bullying followed their son to another school, reported the Telegram.

Dominic Huard said the taunting started four years ago, in seventh grade, after his mother took an AncestryDNA test and discovered she was "half black," and the boy told some of his soccer teammates about the results.

"The kids started saying, ‘Oh, so you’re a monkey,'" his mother said.

The boy, now 16 years old, tried to ignore the insults at first, but other students made monkey sounds and faces.

Teachers and school officials offered little help, and even soccer coach Matt Guertin -- who is Laura Huard's first cousin -- did nothing to stop the taunts.

The teen told his Quaboag teammates that his former teammates would likely mock him with monkey noises and racial taunts, and his parents said that's what they did.

“Sure enough, the kids started making monkey sounds at my son," Laura Huard said. "One of the boys put his hands on my son and pushed him and said, ‘Get out of my (expletive) way, monkey.' At the end of the game, when they were shaking hands, instead of saying, ‘Good game,’ they would say, ‘Good game, monk.'"

The Huards filed a police report in Sturbridge and told officers they planned to protest Sunday outside Tantasqua High School, where principal Michael Lucas came to investigate.

“He was very irate," Laura Huard said. "He said things like, ‘You have to take your signs down. You’re not supposed to be here. I don’t know what the law is but I need to speak to my superintendent, you need to give us time to investigate it.'"

Laura Huard said she heard from other parents about bullying against other students, and she wants some of the top administrators removed.

"I’m like, buddy, you’ve had four years," Huard said. "Now I’m here with my signs and now I’m reaching out to the community and asking them for help. Who is going to stop the racism at Tantasqua? And it’s not just racism. It’s racism and bullying.”