WATCH: Black student who protested Confederate statue walks out of hearing after pro-Confederate Republican is assigned to judge 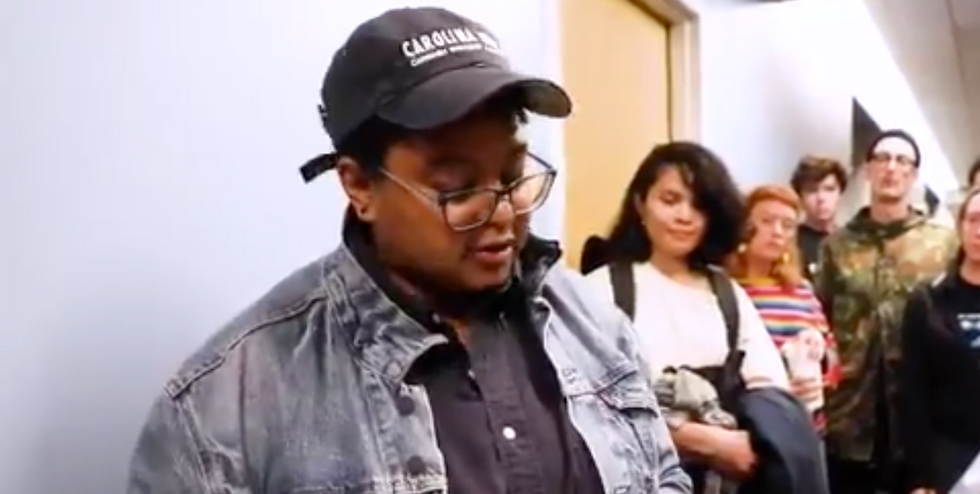 UNC graduate student Maya Little reads a statement after walking out of her honor court hearing for vandalizing the toppled Silent Sam statue. Image via screengrab.

A UNC graduate student facing discipline from the school for throwing blood and ink on the now-toppled Silent Sam statue walked out of her hearing over a conservative judge on her sentencing panel who once defended Confederate Monuments.

The university's Daily Tar Heel newspaper reported that student Maya Little walked out of the second day of her disciplinary hearing after the presiding officer refused to remove student adjudicator Frank Pray, a law student who previously led conservative groups on campus and who posted on social media comments defending Silent Sam.

"Defacing a memorial that is for North Carolinians who lost their lives defending our state, no matter who the attacking force was, is really wrong," Pray told a local media station about a previous vandalism of the statue.

Presiding officer Amelia Ahern, the Daily Tar Heel noted, insisted Pray could remain impartial and sit on the panel because he did not specifically comment about Little's vandalism of the statue.

In response, the student who threw the blood and ink on the statue during a protest held before its impromptu topping earlier this year said she was sure the adjudicator could not be impartial.

"I am going to walk out," Little said.

In a statement given after walking out, Little explained her decision to walk out.

"I was not informed of who was chosen to be on the panel to determine whether I can continue my studies until 4 pm yesterday when the panelists walked into the hearing after me," she read from a prepared statement.

She went on to say that fellow students learned "within a few minutes of research" that Pray "has been a vocal and active supporter of Confederate monuments." Little also claimed the adjudicator "publicly harassed" one of her witnesses, a professor Pray called "a disgrace."

Hours after Little left the hearing, the honor court gave them a letter of warning and 18 hours of community service, Raleigh News & Observer education reporter Jane Stancill tweeted. The reporter also noted that the grad student will not be required to pay restitution.