Borneo cave discovery: Is it the world’s oldest rock art in Southeast Asia? 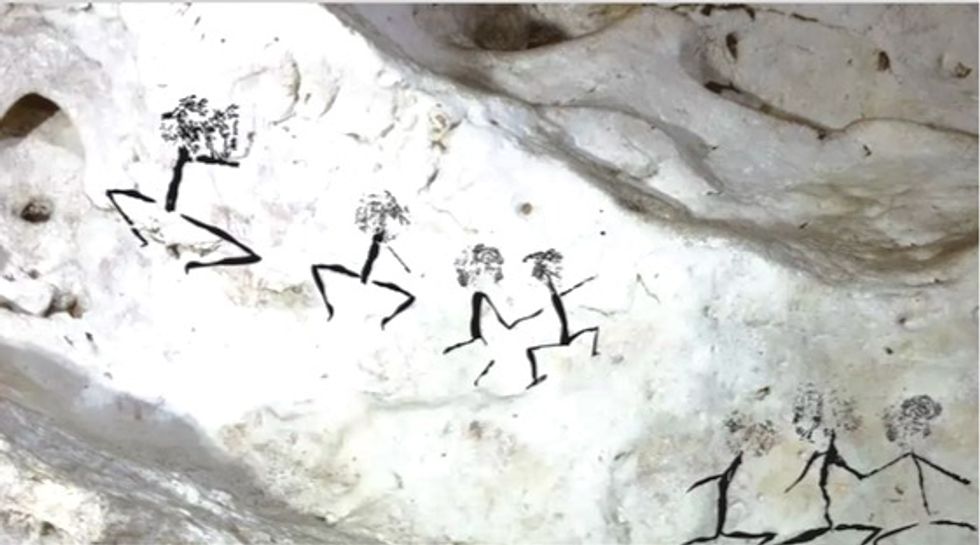 Paintings of human figures from East Kalimantan. NB: The human figures, originally mulberry-coloured, have been digitally traced over to enhance the art. Pindi Setiawan , Author provided

Cave paintings in remote mountains in Borneo have been dated to at least 40,000 years ago – much earlier than first thought – according to a study published today in Nature.

These artworks include a painting of what seems to be a local species of wild cattle, which makes it the world’s oldest example of figurative art – that is, an image that looks like the thing it is intended to represent.

Ancient stone tools found on Sulawesi, but who made them remains a mystery

This discovery adds to the mounting view that the first cave art traditions did not arise in Europe, as long believed.

In the 1990s, Indonesian and French archaeologists trekked into the remote interior mountains of East Kalimantan, an Indonesian province of Borneo.

In limestone caves perched atop forbidding, densely forested peaks, the team discovered a vast trove of prehistoric artworks, including thousands of hand stencils (negative outlines of human hands) and rarer paintings of animals.

Strikingly, apart from the paintings themselves, the team found little other evidence for human occupation in the caves. It seemed as though people had made long and dangerous climbs to these clifftop caves mostly to create art.

The team proposed that the prehistoric artworks can be divided into at least two chronologically distinct phases of art production.

The first phase is characterised by hand stencils and large figurative paintings of animals that are reddish-orange in colour.

A rock painting of a banteng, a type of wild cattle from Borneo.

Hand stencils also characterise the later phase, but these stencils (and associated images) tend to be dark purple (“mulberry”) in colour. During this phase the artists also painted tattoo-like designs on the wrists, palms, and fingers of some stencils – in some instances, hand stencils were interlinked by motifs resembling tree branches or vines.

Mulberry-coloured hand stencils at Liang Téwét in East Kalimantan. Some hand stencils have internal decorations and are interlinked by tree-like motifs.

This amazing discovery raised a host of questions. How old was the cave art? Who created it and why?

In the early 2000s the French-Indonesian team dated part of a cave drapery formation that had grown over the top of a hand stencil.

The quality of the sample they dated was not ideal, but their results implied an age of at least 10,000 years for the underlying artwork.

We now believe the Borneo artworks are far older than previously thought, according to research we conducted with colleagues from the National Research Center for Archaeology (ARKENAS) in Jakarta and other Indonesian scientists.

In our paper, we report uranium-series dates obtained from calcium carbonate samples collected in association with cave art from six East Kalimantan sites. This provides the first reliable estimates for the approximate time of rock art production.

(a, top): Location of Borneo. The dated rock art is in the Sangkulirang-Mangkalihat Peninsula (SMP). (b, bottom): Rock art sites with dated cave art.

The oldest cave art image is a large reddish-orange painting of an animal, similar to the wild banteng still found in the jungles of Borneo. This has a minimum age of 40,000 years.

As far as we can ascertain it is the earliest dated figurative artwork on Earth.

Dated rock art from Lubang Jeriji Saléh. Two samples collected from atop a figurative animal painting yielded minimum uranium-series ages of 40,000 and 39,400 years ago. The dated artwork is deteriorated, but we interpret it as a figurative representation of a Bornean banteng.

The reddish-orange hand stencil art was shown to be similar in age, suggesting that the first rock art style appeared between about 52,000 and 40,000 years ago.

The oldest mulberry paintings, including decorated hand stencils, date to about 21,000-20,000 years ago. A mulberry human figure was created at least 13,600 years ago.

Our dating implies that a major change took place about 20,000 years ago within Borneo’s rock art culture. This was during the Last Glacial Maximum (LGM), a time when the ice sheets were at their greatest extent and the global ice age climate was at its most extreme.

In 2014 we revealed that similar rock art appeared in the Maros caves of Sulawesi around 40,000 years ago.

Sulawesi is adjacent to Borneo and has never been connected to the nearby Eurasian continent. This large island is a vital stepping-stone between Asia and Australia.

Our latest discovery suggests that rock art spread from Borneo into Sulawesi and other new worlds beyond Eurasia, perhaps arriving with the first people to colonise Australia.

The ice age region of France and Spain has long been seen as the global centre of cave art development owing to the stunning animal paintings known from this area.

But while Borneo is the planet’s third-largest island, for most of the ice age it was connected by lower sea levels to the vast continental region of Eurasia – Borneo and Europe were opposite extremities of this landmass.

So it now seems that two early cave art provinces existed at a similar time in remote corners of Palaeolithic Eurasia: one in Indonesia, and one in Europe.

A recent study suggests Neanderthals were making rock art in Spain 65,000 years ago, but there is good reason to question this claim.

It is of course possible that the first modern human rock art arose in Africa and was introduced to Eurasia by later migrations of our species.

Alternatively, Indonesia and Europe may have been separate areas of innovation where ice age rock art emerged independently - if so, it is possible the very earliest cave paintings may one day be found in Southeast Asia rather than Europe.

Adhi Agus Oktaviana, a researcher in archaeology and rock art from ARKENAS, contributed to this article.