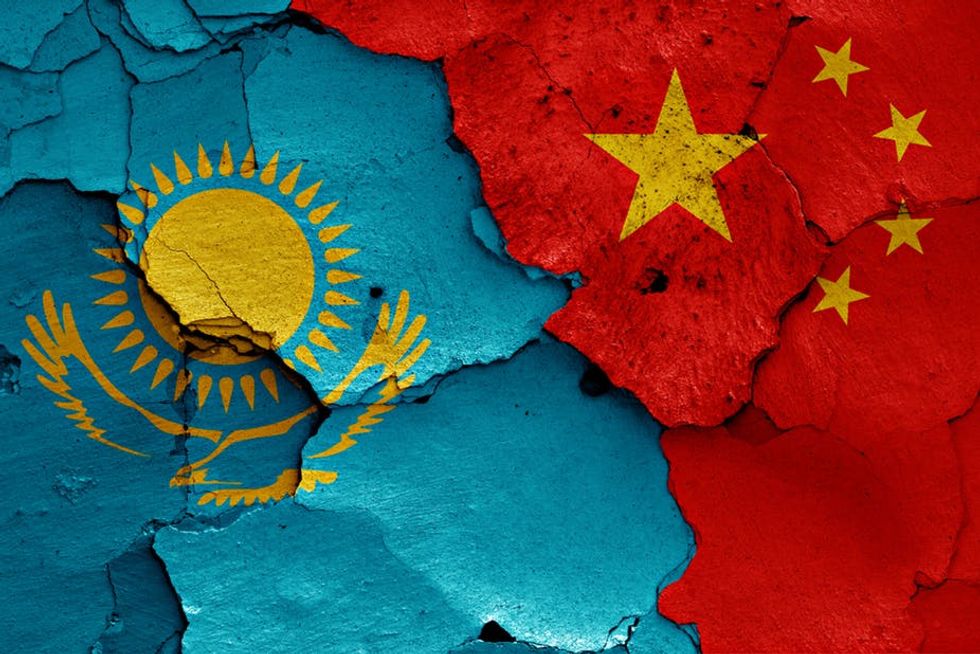 China is moving into Kazakhstan, but who will benefit? Shutterstock

Kazakhstan sees itself as the linchpin of Eurasia and has long been a staunch supporter of cross-border initiatives that help alleviate its disadvantages as a landlocked country.

So it was no coincidence that, in September 2013, Chinese president Xi Jinping chose the country’s Nazarbayev University to announce the creation of new economic corridors across Eurasia as part of China’s ambitious Belt and Road Initiative (BRI). The project could have direct economic benefits for Kazakhstan, but an increasingly powerful China is also playing its own long game with an eye on creating a new Eurasian order.

Russia has plans for the region, too – Kazakhstan is also a member of the Russian-led Eurasian Economic Union (EAEU). The EAEU theoretically reduces customs duties and eliminates non-tariff barriers between member states. This opens Kazakhstan up to a bigger regional market while protecting domestic industries from the competitive prices of imported Chinese products. Kazakhstan also makes money from the transit of goods coming from China – and new overland corridors are thought to increase cross-border commerce.

Central to Kazakh and Chinese plans is the Khorgos Gateway dry port, which handles rail – rather than sea – cargo. Located on the Chinese-Kazakh border, it is a key gateway on the “Silk Road Economic Belt” (SREB), which is supposed to stretch from China all the way to Europe.

The Khorgos Gateway is “where East meets West”, according to its website. But there is one major obstacle: the different track gauges used by the two countries’ railways. Chinese, like most European, trains operate on a track gauge of 1.435 metres, while the track gauge in the countries of the former Soviet Union, such as Russia, Belarus and Kazakhstan, is 1.52 metres. Consequently, freight containers entering Kazakhstan from China have to be shifted onto the wider track gauge by cranes.

With six parallel railway tracks, the Khorgos port has an efficient handling capacity. And now that China has ratified the UN’s International Road Transports (TIR) Convention, special bloc trains can be sealed with certificates that obviate the need to inspect the contents at each border crossing. But is it really a great leap forward or just a white elephant in the steppe?

A few kilometres east of the dry port is the International Centre for Border Cooperation (ICBC), a Special Economic Zone established to attract investment and stimulate regional development. In practice, most visitors are locals that come for duty free shopping in the malls straddling this no man’s land between China and Kazakhstan. Indeed, sceptics have speculated that the zone will serve primarily as a trading hub for Kazakh middlemen to resell cheap Chinese products to domestic markets in nearby Almaty (Kazakhstan’s largest city) and neighbouring Uzbekistan – not distant Europe.

I visited in June 2018 – and, to enter the ICBC from the Kazakh side of the border, I had to wait to pass through passport control in a long line of Uyghur, Hui, and Kazakh shoppers carrying carpets and carting enormous parcels of clothes, shoes and electronic gadgets. This is not the “New Dubai” some have promised.

The economic benefits for Kazakhstan as a Silk Road gateway have been limited so far. Chinese “investment” projects under the BRI banner (for which reliable numbers are hard to come by, but there are said to be around 50) haven’t yet significantly improved employment in Kazakhstan. Indeed, many of China’s “investments” are really schemes to lend money to Kazakh authorities which they then have to reinvest to secure Chinese engineering contracts.

Because the money hardly leaves the Chinese system – and the impression prevails that China’s interest in Kazakhstan lies in building and owning assets – simmering anti-Chinese sentiment in the region may become difficult to contain. China will have to convince not only Russia, but also its Central Asian partners, that its grand connectivity narrative isn’t just about establishing Chinese hegemony in the region.

Kazakhstan’s location as a geostrategic “hub” at the crossroads of the SREB and the EAEU also means it is at the sharp end of frictions between the main sponsors of the two projects: Russia and China. The EAEU is a regional integration project initiated and dominated by Russia – but, for the first time in modern history, Russia’s power is receding while China has already replaced Russia as the region’s most important trading partner. The Chinese government also appears to be conscious of its increased geopolitical leverage in the area.

Kazakhstan’s EAEU membership is also controversial domestically. Kazakhstani experts have argued that the economic benefits don’t outweigh the political costs of accepting a Russian quasi-veto over tariff and trade policy. The Kazakh leadership has already criticised Russia’s politicisation of the EAEU. It also felt ignored when Russia acted on behalf of the union to sign declarations of continental importance with China and set up working groups without including other EAEU members.

Russian officials, in turn, were equally irritated when the Kazakh government announced its own alignment (“sopriazhenie”) between the Kazakh “Nurly Zhol” economic stimulus programme and the Chinese SREB, which they saw as a move to undermine the EAEU.

Kazakhstan has become a microcosm for a new Eurasian order in the making. Both Kazakhstan and Russia look at China’s economic power with a mix of awe and alarm. At the same time, both Astana (the Kazakh capital) and Moscow attempt to engage with and contain Chinese business interests and growing economic power, aware that a tectonic geopolitical shift is underway, which they hope to be able to manage in one way or another.